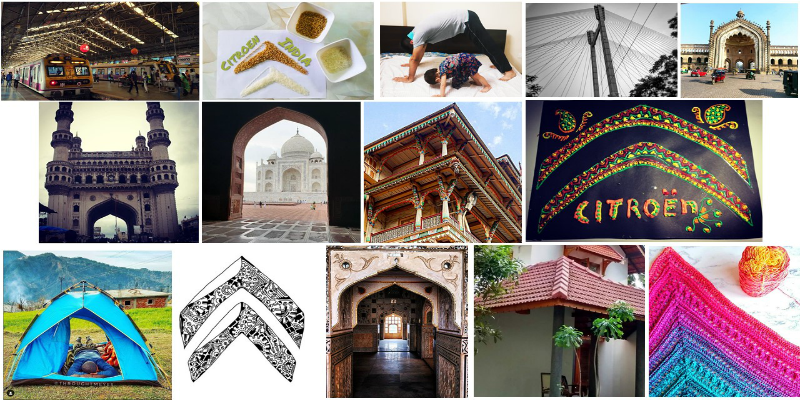 Citroën, part of the European auto conglomerate, Groupe PSA, continues to create buzz in India post its recent grand entry into the market. In July 2019, Citroën India announced the launch of a contest for the Indian market – #InspiredByIndia – as a brand immersion exercise. This digital campaign saw an overwhelming response from participants, resulting in increased brand awareness and social media engagement.

Using the brand tagline Inspired By You, participants got to showcase multiple Indian cultural elements resembling the Citroën logo (Double Chevrons) ranging from food, yoga, monuments, architecture etc. The campaign was driven by content created by influencers with the brand proactively engaging with user comments leading to multiplying conversations. A strategic partnership with Kalki Koechlin, renowned Bollywood actress with French roots, drove over 2 lakh views in a span of 3 days, leading to increased engagement for the contest. The campaign increased the Citroën follower base on Instagram and boosted the engagement rate on Facebook. This campaign helped raise awareness and love for Citroën in India with higher brand sentiments.

Commenting on the contest, Mr. Roland Bouchara, Senior Vice President, Sales & Marketing, Citroën India, says, “We are thrilled to see the excitement for the Citroën brand from people across the country. The #InspiredByIndia campaign has resonated with the Indian audience and this contest allowed them to express their creativity using our logo. It also brings out the deep sense of culture and diversity, which is a unique facet of India. Citroën has been around since 1919 but still relatively unknown in India and so for us initiatives like this helps build the familiarity and gives us a platform to share the rich heritage and legacy of the brand. Our heartiest congratulations to the winners of this contest.”

The digital campaign was an integrated agency effort by Havas Creative, influencia, Mediacom and Adfactors PR.

At the heart of the automotive market, Citroën has asserted itself since 1919 as a popular brand in the true sense of the word, making people and their lifestyles its first source of inspiration. A spirit underlined by its ‘Inspired by You’ signature and embodied by cars combining unique design and benchmark comfort. Within the sector of mainstream brands, Citroën also stands out with a unique customer experience (Citroën Advisor, ‘La Maison Citroën’, etc.). In 2018, the Brand sold 1.05 million vehicles in over 90 countries.

9 Most Important Things You Need to Know About Bamboo Clothing

7 Teenage Skin Care Routine For Your Kids From Today