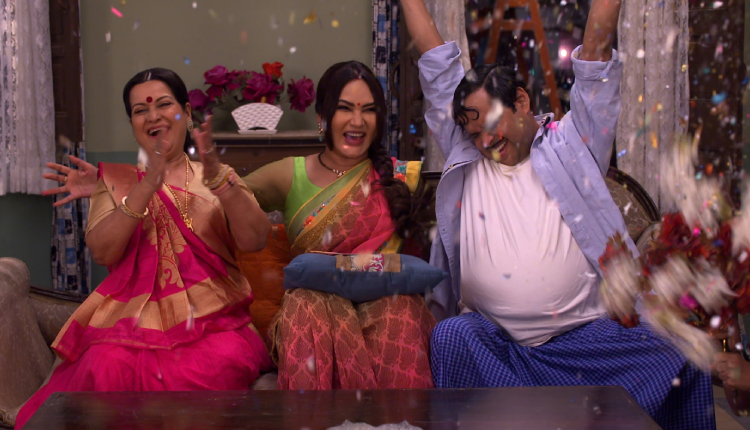 In &TV shows Doosri Maa, Happu Ki Ultan Paltan and Bhabiji Ghar Par Hai, characters will be seen competing. About &TV’s Doosri Maa track, Yashoda shares, “A kidnapper enters Yashoda’s (Neha Josi) home. Suresh (Sunil Dutt) stops Krishna (Aayudh Bhanushali) because he believes Krishna is attempting to flee from the house. Arvind tells everyone that Krishna was attempting to catch the thief, but no one believes him. Krishna gets upset and recalls her late mother Mala (Nidhi Uttam). Ashok hears Krishna from the outside room and is extremely saddened. Suresh goes to the police station the next day to file a report against Krishna for attempting to steal from the house, frightening Krishna. Ashok on the other hand tries to convince the Police inspector that Krishna is innocent. Will he be able to save Krishna from the false accusation?”

About &TV’s Happu Ki Ultan Paltan track, Daroga Happu Singh shares, “A soap salesman approaches Rajesh (Kamna Pathak) and informs her of a contest in which she can win two tickets to Rishikesh for a vacation. Rajesh is excited, but she does not have any money. So, she borrows some money from Katori Amma (Himani Shivpuri) to buy the soap and participate in the contest. Beni (Vishwanath Chaterjee) invests in the soap as well, hoping to win the prize. However, Rajesh gets lucky and wins the prize, leaving Beni enraged. Rajesh instructs Happu (Yogesh Tripathi) to accompany her to Rishikesh so that they can spend quality time together. Katori Amma, on the other hand, tells Happu that it is her age to visit Rishikesh and bathe in the holy river Ganga. Rajesh gets enraged upon hearing this and informs her that she has won the prize, so she will travel to Hrishikesh. Katori Amma reminds her of lending money to participate in the contest and convinces her that she is the true winner. Will Rajesh be able to convince Happu to accompany her to Rishikesh?”. About &TV’s Bhabiji Ghar Par Hai track, Vibhuti Narayan Mishra shares, “Anita (Vidisha Srivastava) gives Vibhuti (Aasif Sheikh) and Chacha Ji (Anup Upadhyay) a long list of food items to prepare because she has invited an investor to dinner. While they are both cooking in the kitchen, Vibhuti sees Angoori (Shubhangi Atre) and to impress her with his food preparations, he invites her to dinner as well. In the evening, the investor arrives for dinner, and after a few minutes, Angoori and Tiwari Ji (Rohitashv Gour) also join them. The investor enjoys the food and compliments Vibhuti and Chachaji on their culinary abilities. After dinner, however, he decides to invest in Tiwari Ji’s Kacha Banyan business rather than Anita’s grooming classes, which upsets her. Anita then tells Vibhuti and Chachaji that they should open a chat stall and earn money because they are good cooks. They both agree and begin setting up their stall. They start to make a good profit, and Anita happily begins shopping with their money and bragging about it to Tiwari and Angoori. To compete with her, Angoori begins to spend large sums of money on shopping, causing Tiwari stress. Who will end up spending more and making the other jealous, Angoori or Anita?”.