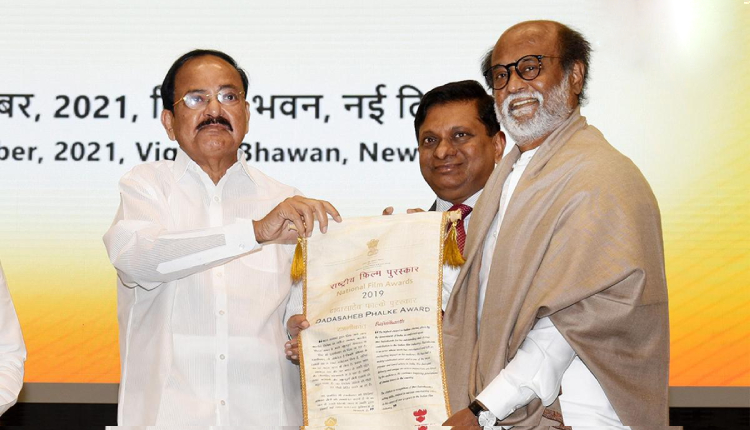 Superstar received the most prestigious Dadasaheb Phalke Award at the 67th National Film Awards function held at the national capital, from Vice President M. VenKaiah Naidu on Monday. The one and only Superstar of Indian Cinema touched yet another milestone in his career which covers almost 45 years and continues so. Lining up the awards throughout his career, the 70 years young actor has been honoured with the prestigious award yesterday. Apart from this, Rajinikanth is also known to be the recipient of Padma Bhushan in 2000 and the Padma Vibhushan in 2016. Notably, he is the second Tamil actor to receive the award after the legendary actor Sivaji Ganesan.

The thespian’s fame is limitless as he has not only worked in the Tamil film industry but also in other regions and languages including Telugu, Kannada, Malayalam and Hindi. His fame has no boundary as it blows overseas as well. Not to mention, the craze for his style and acting captivates millions of fans all over the world. The world of the 80s and 90s depicts the fad for the man himself. No wonder why he still holds the same place in this 21st century. Ruling the silver screen for several decades is not an easy-peasy thing though. You know how the title card of “SUPERSTAR RAJINIKANTH” make the fans go berserk in theatres.

Would he have imagined receiving the Phalke award back then? Well, born as Shivaji Rao Gaekwad in a middle-class Marathi family of Karnataka, the younger phase of Rajinikanth met several hurdles as he lost his mother at eight. He was into multiple odd jobs before he showed up as a bus conductor in the state’s capital. Invaded by the acting bug and with the obliging friend, his bus driver Raj Bahadur, the young Rajinikanth landed in Madras now Chennai to take up his next avatar.

Rajinikanth’s debut movie, “Apoorva Raagangal” released in 1975 was directed by the legendary director K. Balachander portrayed him as an antagonist. He became a known face due to his negative roles in the succession movies. The proud find of K. Balachander is known for his unparalleled style on both on-screen and off-screen. To explain a few, the tossing of cigarette and lighting it, the fast dialogue deliveries, fierce energy, speedy walk and a smirk along with a charming hairstyle are notable.

Fondly called Thalaivar by the fans, Rajinikanth did ride on the road of hippy lifestyle concisely during the 80s. It was once the city’s uproar and he slowly and steadily took control of his life later. Moved to the next phase of his life, Superstar focused on his cinematic career cheerfully. Provided several hit movies from the past to the present, he is still a hard worker thereby gracefully ageing. In the meantime, he is widely talked about for his Himalayan visits as well.

Although he took several breaks to revive up his health, Rajinikanth’s cinematic vision is still clear. Sounds like we completed the book on the life of Rajinikanth, doesn’t it? Or, the real life of the Superstar itself is a movie as it is definitely a hell of a ride. Be it off-screen or on-screen, his sanguine vibe is beyond price. Looking into his movies such as “Padaiyappa”, “Annamazhai” and “Sivaji”, all these depicts the ups and downs of life. Along with these, “Baasha” and “Thalapathi” are notable as they portray the friendship bond and are still evergreen and most loved by the younger generation.

Meanwhile, the thespian has also tried politics but dismantled it last year with a better vision ahead. Ageing gracefully, Rajinikanth’s upcoming movie “Annaatthe” is to hit the screen this Diwali. No wonder if it is going to be a festival in theatres as the fans cannot wait to witness Thalaivar on the big screens after a long gap. However, the 70-year young Rajinikanth thanked his mentor, K. Balachander, his friend, Raj Bahadur, his brother, Satyanarayana Rao, Tamil people and fans worldwide after receiving the award on Monday. This speech video of Thalaivar has gone viral on social media. Admit it, we cannot cease admiring him for who he is now.

SOCIAL brings to you a horror extravaganza this Halloween