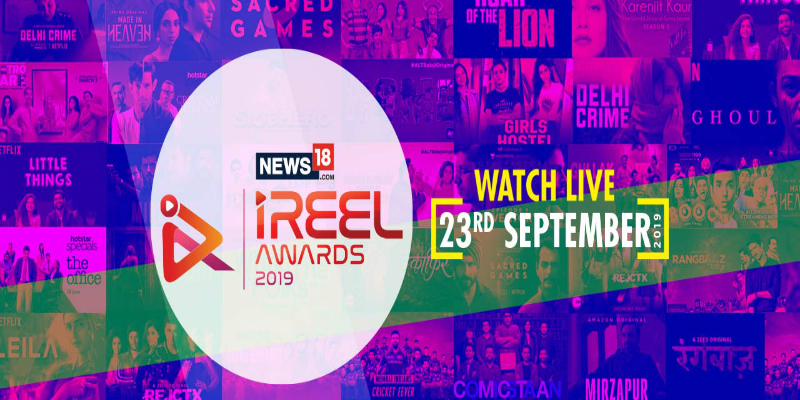 Mumbai, 11September, 2019: As the country warmly embraces web-series, driving forward its phenomenal growth and momentum, News18.com, India’s second-biggest news website, announces the second edition of its marquee property – News18 iReel Awards 2019. This is to honour the best in the world of web shows. After a spectacular first edition, the platform has been lauded by industry luminaries and has succeeded in cementing its position as one of the most sought-after awards in the web-series space.

The award ceremony is set to take place on September 23in Mumbai. News18 iReel Awards 2019 will celebrate the outstanding contributions of brave and talented digital storytellers who have created binge-worthy shows for the Indian audience.

The evening promises to be a star-studded affair that will see nominees like Nawazuddin Siddiqui, Pankaj Tripathi, Jackie Shroff, Shefali Shah, Dia Mirza, Shweta Tripathi compete to win these coveted awards. The nominations include the exceptional work put forth by these stars for their remarkable performances in Sacred Games 2, Delhi Crime, Criminal Justice and other names that are wildly popular not only in India but enjoy a global presence as well. The complete list of nominations can be found here. <https://bit.ly/2k2MI9Z >

Over the years, content on the OTT platform has changed dramatically. While some shows have followed a set pattern, others have shown the willingness to explore beyond the regular storylines. News18 iReel Awards intends to support such shows that have rewritten and redefined the rules of the game. Bringing together content creators, performers, digital influencers and storytellers under one roof, the event seeks to create a-night-to-remember.

For this year’s edition, the winners of the prestigious awards are being identified through a panel of jury and via online voting. Helmed by renowned film critic Rajeev Masand, the panel will also include Priyanka Sinha Jha, Group Editor, Entertainment, Network18. The audience and readers of News18 are also invited to vote for the best storytellers of 2018. The voting lines are open now. While the online voting has a 20% weightage on the final results, the jury panel will account for the rest 80%.

The categories and nominees are as follows:

Praveen Thampi, Executive Editor, News18.com, said, “OTT platforms offer budding talents an opportunity akin to what the parallel cinema of the 1970s and 80s promised. We finally have a platform where you can write and produce ground-to-earth stories free from the compulsions of Bollywood. In the last one year itself, more talent has made their mark through web series than many years of mainstream cinema. At News18.com we had been tracking it closely, and we felt the OTT industry is beginning to stand on its feet. The idea of iReel awards began from there, which were the first-ever awards instituted for web series in India. It’s a gratifying feeling to see it enter its second avatar.”

Commenting on the 2nd edition of the Awards, Priyanka Sinha Jha, Group Editor, Entertainment, Network18, said “I am extremely excited about the 2nd edition of News18 iReel Awards. Like last year, we are set to unleash the awards with great enthusiasm. Our focus has always been content and in this era where there’s a wide variety of content getting consumed by audiences, we need to encourage good content. The web series space has opened up opportunities for new actors, new film makers and new ideas. This awards IP is a great initiative to motivate creators in the digital segment as it reaches out to the best, the brightest and compliment their excellent work. Via the News18 iReel Awards 2019, we look forward to yet another gala evening that recognizes the innovation and path-breaking content creation in the web series space.”

Eminent film critic Rajeev Masand, who was also the jury panel moderator last year, said, “I am delighted to be a part of the venture yet again. The Indian OTT space has now reached a position where it never fails to excite us with a vast range of offerings spanning diverse genres. Offering a convenient mode of content consumption, we all celebrate and recognize what they offer the audience. And with the News18 iReel Awards 2019, we take it a step ahead to acknowledge the art and the people behind such pathbreaking content. It is an award that I look forward to being a part of every year.”

NEWS18.com (formerly known as ibnlive.com) is the digital destination of CNN News18 (formerly known as CNN IBN) with hard news as its core offering and interactivity as its key component. Along with a bevy of mobile- and multimedia-enabled content, News18.com is a multi-platform offering that, for the first time, provides viewers/users an opportunity to contribute to the news process and interact with editors and reporters. NEWS18.com is powered not just by NEWS18 journalists but also by Network18’s team of over 1,000 news professionals. NEWS18.com is also recognized for its one-of-the-kind offerings such as CricketNext, Compare India, and Indiwoo amongst others.

Network18 Digital (N18D) is the digital arm of Network18, one of India’s most diversified media conglomerates with interests in television, Internet, films, e-commerce, magazines, mobile content and allied businesses. N18D is among the largest multi-platform destinations for objective breaking news, opinions, financial data and infotainment for the evolved digital news consumer. Network18 Digital houses assets such as moneycontrol.com, firstpost.com, news18.com etc., and is constantly seeding new ideas to be the dominant force in the digital space. It caters to all sections of society, especially to the digital savvy consumer, the millennials and Generation Z users who access and consume content on the go.

Solitaire Jewellery for the Artist By CaratLane