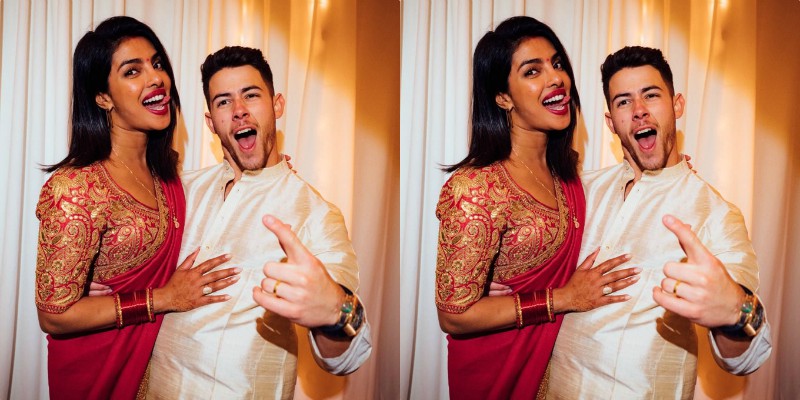 Priyanka Chopra, who married Nick Jonas back in December 2018 celebrated her first Karva Chauth with beau. The actress at first shared pictures with her BFF on the day which got fans worried about Jonas not being there, but she soon shared pictures with him on social media while wearing a traditional white sari.

Priyanka first shared the moment on Instagram and wrote, “Me and my friends #karvachauth2019” with James Cavanaugh and VJ Anusha Dandekar. She then followed it with an official Karva Chauth picture with hubby Nick Jonas. The actress flew to where Nick has been for his Happiness Biggens Tour to celebrate the Indian festival.

She captioned it as, “Karwa chauth at a @jonasbrothers concert. Definitely a first I’ll always remember! ️🏽 @nickjonas #karwachauth”

The two never leave a chance to gush about each other on social media or in public, their public display of affections have become somewhat a major event for their fans. Priyanka has been by the American singer’s side since their tour kicked off. Even while in India for promotions the actress went back and forth to show support for her husband.

On the work front, Priyanka just released her Bollywood comeback film, ‘The Sky Is Pink’ co-starring Farhan Akthar and  Zaira Wasim. While she also has several other projects lined up. She will also be seen in  Robert Rodriguez feature ‘We Can Be Heroes.’,  adaptation of the Man Booker-winning novel ‘The White Tiger’, for Netflix alongside Rajkummar Rao and wedding comedy set in India that will be co-produced by Mindy Kaling and Dan Goor for Universal Studios.

The Untold Secrets And Health Benefits of Jack Fruit