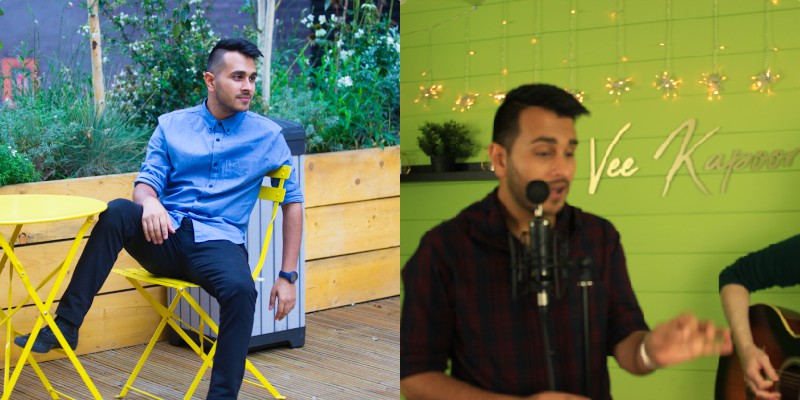 The letter ‘V’ stands for ‘Variety’ and ‘Victory’ which Vee Kapoor seems to have achieved, after his latest cover release ‘Wajah Tum Ho’. Wajah Tum Ho which belongs to the world of the Hate Story series, a high voltage, love-hate series spanning over 4 movies, was originally sung by Armaan Malik. Known for the bold representation of its characters, Vee Kapoor has also made a bold and strong attempt with this cover.

With his unfathomable knowledge about music and undying passion for the art, his work speaks volumes about his music creations, music direction, use of instruments, the melodious ‘harkat’ ‘alankaar’ and ‘alaap’ he acquaints us with through his rich compositions. Just like his previous covers, Vee Kapoor has induced a new spirit into the song which makes the song ‘lyrically creative and soulful’. Although he keeps shuttling between London and Mumbai, music has always kept him grounded and very close to his Indian roots. His knowledge has translated beautifully into this song with instruments like the guitar playing a pivotal role.

Talking about the song, Vee Kapoor points out that, “This song was particularly difficult and different for me at the same time because the song consisted of a beautiful amalgamation of cathartic and catastrophic emotions being conveyed at the same time. The use of instruments is equally responsible to convey the feel of any song, thus moulding it pleasantly.” After the towering success of Giridhaari, Vee Kapoor was keen on doing something impactful and intense, which could help the audience resonate with him in a different sphere captivating the same base of music. With Wajah Tum Ho, not only has he silhouetted newer styles of music on his diverse horizon, but also musically played with different notes constituting the song. Music unveils a completely different side of Vee Kapoor which gets enriched with every composition he works on. It is heartening to see his work in the field of music, elevating Indian music to new levels being on foreign land.