​Chhalaang Trailer Will Be Out Today 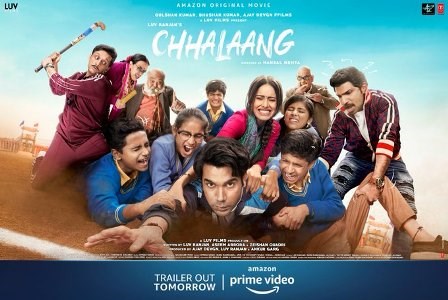 After announcing its releases date, the makers of sports drama, Chhalaang confirms that the trailer for the film will be out today and unveils a spunky new poster.

Directed by Hansal Mehta, Chhalaang will premiere on Amazon Prime Video on November 13 and the trailer for the same will be out today. The film stars Rajkummar Rao and Nushrat Bharucha in lead roles. The actor will be seen playing a sports teacher in this inspirational social comedy. The film is presented by Bhushan Kumar and produced by Ajay Devgn, Luv Ranjan and Ankur Garg.

The film was earlier named Turram Khan, but it was renamed as Chhalaang in December. It is a social comedy set in a small town in Uttar Pradesh. The film also stars Mohammed Zeeshan Ayyub in a crucial role.

This is the first time Rajkummar Rao will be seen with Nushrat Bharucha. While Chhalaang is the actor’s and Hansal Mehta’s fifth film together. Earlier, they worked in films like Shahid (2012), CityLights (2014), Aligarh (2015) and Omerta (2017).