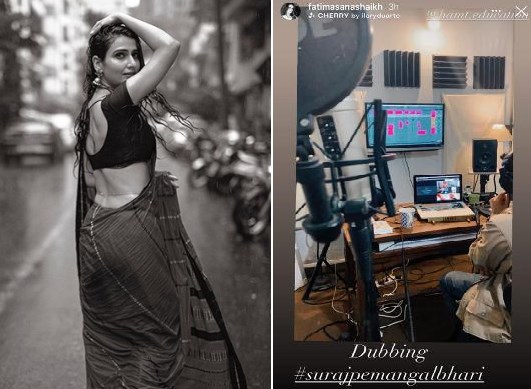 Dangal Girl Fatima Sana Shaikh is dubbing for her third movie, Suraj Pe Mangal Bhari as lead actress. Following all necessary norms, she has resumed work amidst the new normal.

Fatima shared a glimpse of her dubbing session for the upcoming project ‘Suraj Pe Mangal Bhaari’. She shared an image of her dubbing studio on her social media story. She will be essaying the role of a typical ‘Marathi’ girl, donning a traditional attire. It will be the first time the audience is going to see her in Indian attire and she looks very convincing in the look.

The ‘Thugs Of Hindostan’ actor also gave fans a sneak peek of her look and posted a rail of pictures wearing a red saree that garnered her appreciation from fans. For the first time, Fatima will be seen sharing the screen space with Manoj Bajpayee and Diljit Dosanjh in ‘Suraj Pe Mangal Bhaari’.

The movie is a family comedy and revolves around the quirks of its refreshing yet relatable characters. The project is bankrolled under the banner of Zee Studios, the flick set in the 90s has been directed by Abhishek Sharma.

5 Healthful Immune Boosting Foods To Enjoy In The Evenings