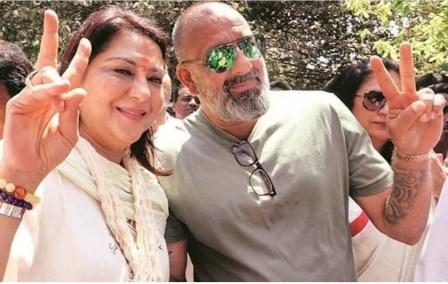 There is no other love like the love of brother and sister. As Priya turns 54, actor Sanjay Dutt took to his Instagram handle and wished his sister a very happy birthday. The ‘Sadak 2’ actor penned down an emotional note for his sister. Sanjay has seen lots of ups and downs in his life. And recently was diagnosed with lung cancer thanked his sister for always standing by his side. Sanjay Expressing his gratitude wished all the world happiness to his sister.

Sanjay on his Instagram wrote, “Thank you for always being a constant in my life. I wish you all the happiness in the world. Happy Birthday @priyadutt”

Recently, as per the reports, Sanjay was taken to Mumbai’s Lilavati Hospital when he complained of chest discomfort and breathlessness. He tested negative for COVID and soon got discharged which was followed by his post on social media. News confirms that the 61 years old actor is indeed suffering from Stage 3 lung cancer. He will soon be flying to the US for treatment.

Meanwhile, on the work front, Sanjay Dutt is awaiting the release of Mahesh Bhatt’s Sadak 2, which will premiere on Disney Plus Hotstar on August 28. He also has the highly anticipated KGF: Chapter 2 and Bhuj – The Pride Of Nation in his kitty.

Sadak 2 is helmed by Mahesh Bhatt and produced by Mukesh Bhatt under their banner Vishesh Films. The film is the sequel to the 1991 film Sadak. The sequel stars Sanjay Dutt, Pooja Bhatt, Alia Bhatt, and Aditya Roy Kapur.