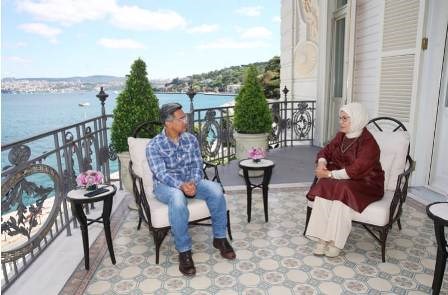 Slowly things are resuming back to normal amidst the widespread of Covid-19, yet it is not 100% safe to shoot in any part of the country. Therefore, the producers are taking their film crew to shoot their films in safer countries. Recently, the team of ‘Bell Bottom’ left for the UK to shoot for their film there.

Now Mr. Perfectionist of Bollywood Aamir Khan met the first lady of Turkey Lady Emine Erdogan to take permissions to film the remaining parts of his upcoming film ‘Laal Singh Chaddha’ there. The meeting was held on Saturday at the presidential residence of Huber Mansion in Istanbul.

Apart from shooting his upcoming film there, Aamir Khan also discussed various social responsibility projects with the Lady, including the Water Foundation that he co-founded with his wife Kiran Rao to deliver water to drought-stricken areas in India.

First Lady Emine Erdogan herself shared the news on her social media account and wrote, “I had the great pleasure of meeting @aamir_khan, the world-renowned Indian actor, filmmaker, and director, in Istanbul. I was happy to learn that Aamir decided to wrap up the shooting of his latest movie ‘Laal Singh Chaddha’ in different parts of Turkey. I look forward to it.”

‘Laal Singh Chaddha’ is the remake of the 1994 film ‘Forrest Gump’ starring Tom Hanks in the lead role. The film revolves around the life of a man with a very low IQ who unfolds events in India’s history through his perspective.

The film is being directed by Advait Chandan who has previously directed the film ‘Secret Superstar’ and written by  Atul Kulkarni.  Kareena Kapoor Khan plays Aamir’s love interest in the film.

The actor is expected to shoot the remaining parts of the movie in multiple Turkish provinces including Nigde, Adana, and Istanbul. The shooting schedule of 40 days is due to being in October.