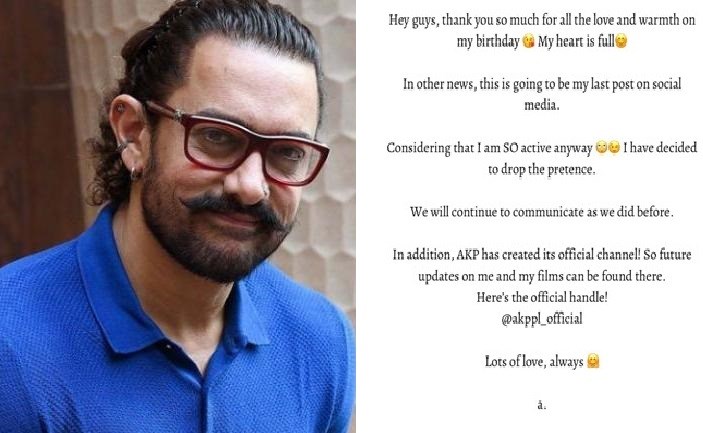 Superstar Aamir Khan drops the pretence of social media and issues a statement confirming that he will interact with his fans like old days.

Aamir Khan just took to his social media profile and shared the statement. The actor thanked each and everyone for warm birthday wishes and stated that he will no-longer be available on social media.

The statement read, “Hey guys, thank you so much for all the love and warmth on my birthday…My heart is full. In other news, this is going to be my last post on social media. Considering that I am SO active anyway, I have decided to drop the pretence. We will continue to communicate as we did before. In addition, AKP has created its official channel! So future updates on me and my films can be found there. Here’s the official handle! @akppl_official. Lots of love, always. a.”

Aamir has quit social media to focus more on his work and as always, keep himself dedicated to his art. He joined Instagram and Twitter not so long ago!

He will soon be seen in Laal Singh Chaddha, helmed by Advait Chandan, the film is an adaptation of the 1994 American film Forrest Gump which itself based on Winston Groom’s 1986 novel of the same name.

The film also stars Kareena Kapoor and Mona Singh. It is now slated for cinema release during Christmas 2021.