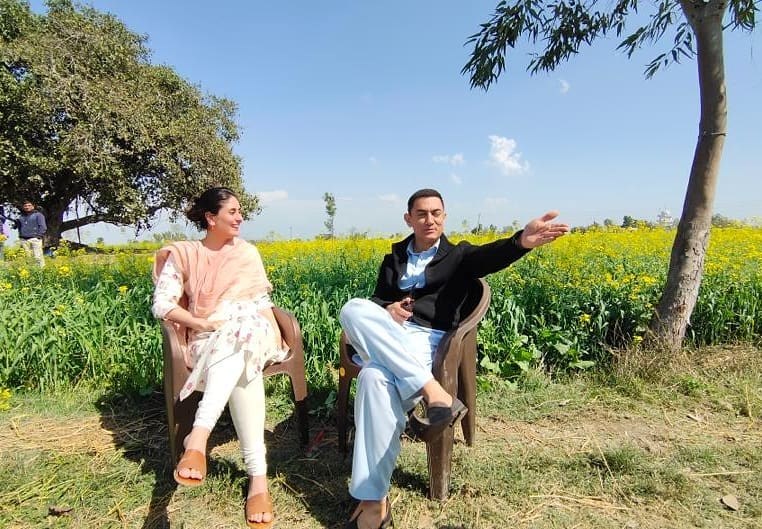 ‘Laal Singh Chaddha’ actress Kareena Kapoor Khan on Thursday declared on social media that she has completed shooting of her upcoming comedy drama film. Kareena’s co-actor from the film, Aamir Khan has reacted on her recent post by making a witty comment that he has requested filmmaker Advait Chandan to write a few more scenes between him and Kareena so that they can continue shooting with her for a few more days.

On Thursday afternoon, Kareena Kapoor Khan shared a beautiful picture on her Instagram handle with Aamir Khan as she wrapped up shooting for her portion for their upcoming film, ‘Laal Singh Chaddha’. The actor, who is more than five months pregnant with her second child, is seen chatting with Aamir amid the lush green fields.

While Kareena is in a salwar suit, Aamir in a sky blue kurta-pyjama paired with a cardigan. He can be seen gesturing towards something as the two indulge in a chat. The two had been shooting for the film in areas around Delhi.

Talking about shooting at this time of the year, Kareena wrote, “And all journeys must come to an end. Today, I wrapped my film Laal Singh Chaddha… tough times… the pandemic, my pregnancy, nervousness but absolutely nothing could stop the passion with which we shot, with all safety measures ofcourse.”

Thanking everyone, from her co-star to other crew members, she added, “Thank you @_aamirkhan and @advaitchandan for an intense yet poignant journey… thank you to my most wonderful team @avancontractor, @teasemakeup, @makeupbypompy, @poonamdamania and the entire crew… @nainas89 you were missed. Till we cross paths again…”.

Reacting to Kareena’s recent post, Aamir Khan reposted the same picture on his Instagram handle and wrote, “What are you talking about Kareena? End of journey? No way! I’ve requested Advait to write a few more scenes for us, so we can continue shooting with you”.

Aamir Khan shares a close bond with Kareena Kapoor Khan. In many of his interviews, Aamir has confessed that he loves to work with her. Before ‘Laal Singh Chaddha’, both of them have shared screen space in ‘3 Idiots’ (2009) and ‘Talaash’ (2012).

‘Laal Singh Chaddha’ is the remake of Hollywood film ‘Forrest Gump’, starring Tom Hanks in the lead role. It was expected to release by the end of this year but has now been postponed to Christmas 2021.

It also stars Vijay Sethupathi and Mona Singh in important roles. ‘Secret Superstar’ director Advait Chandan is helming the film from a script by actor-writer Atul Kulkarni. The film has music by Pritam, with Amitabh Bhattacharya writing the lyrics.