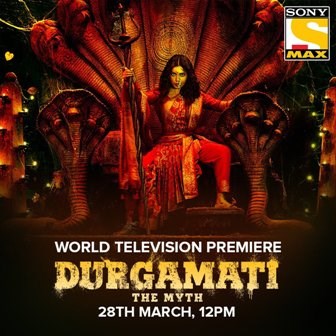 After receiving positive response with its digital release, Durgamati will have its World Television Premiere on 12th March, only on Sony Max.

Horror thriller, Durgamati is helmed by G. Ashok which is a remake of his own Telugu-Tamil bilingual film Bhaagamathie (2018). The film stars Bhumi Pednekar as an IAS officer, with Arshad Warsi, Jisshu Sengupta and Mahie Gill playing supporting roles.

The film is produced by Bhushan Kumar, Akshay Kumar and Vikram Malhotra under T-Series, Cape of Good Films and Abundantia Entertainment.

Meanwhile on the work front, Akshay Kumar has lined-up: Sooryavanshi directed by Rohit Shetty, Yash Raj Films’ Prithviraj, Ranjit M Tewari’s Bell Bottom, a spy thriller, and Aanand L. Rai’s Atrangi Re along with Sara Ali Khan in dual roles opposite him and Dhanush, for release in 2021.