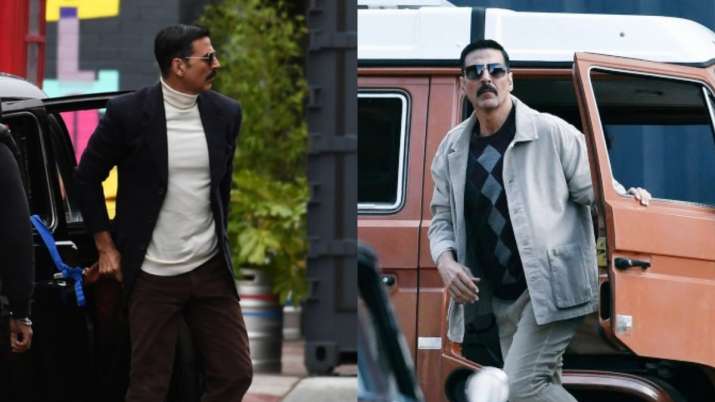 Akshay Kumar along with his entire cast-crew of Bell-Bottom has started shooting for period spy-drama overseas and now the first on-location still of the dapper star is out and going viral.

Actor Akshay Kumar has commenced the filming of his forthcoming spy-thriller Bellbottom in Glasgow, Scotland. On location pictures of Akshay’s look from the sets are going viral on social media. It sees him in retro avatar as he sports a mustache and shoots for scenes on a busy road set.

Akshay is dressed in high neck pullovers, printed sweaters, suits, and jackets in various images. His serious look and tinted sunglasses add more charisma and feel to the spy character he plays in the Ranjit Tewari directorial.

Bellbottom is a thriller set in the 1980s and is said to be inspired by true events. The story is about one of India’s forgotten heroes. The film also features Huma Qureshi, Vaani Kapoor, and Lara Dutta. Covid-19 safety protocols are being observed as the cast and crew shoot an important outdoor schedule in Scotland.

Along with medical-grade masks and face shields, the production house has made it mandatory for all cast and crew to wear a wristwatch that will constantly monitor their oxygen levels, body temperature, blood pressure, stress level, and pulse.

Bell Bottom is directed by Ranjit M Tewari. The film is written by Aseem Arrora and Parveez Sheikh, with production by Pooja Entertainment and Emmay Entertainment. It is scheduled to release on April 2, 2021.