Gunjan Saxena: The Kargil Girl Trailer Will Be Out Tomorrow, CONFIRMED 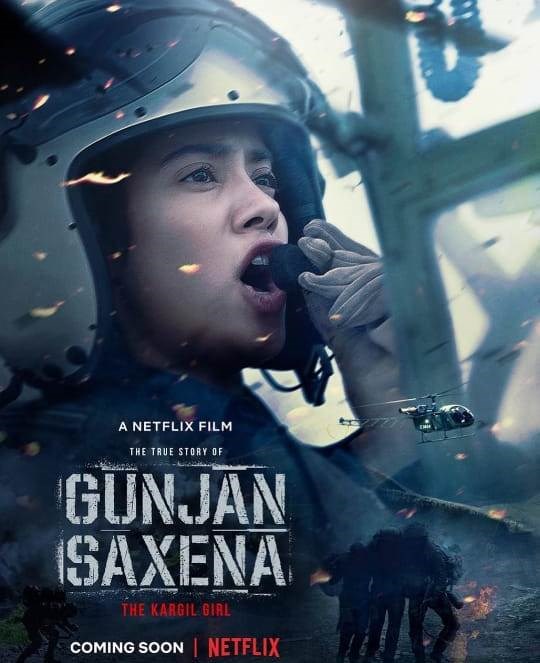 Since OTT platforms have saved the grace and are filling up the place for Multiplexes and cinema halls, the filmmakers are also leaving no stone unturned to promote their films on the social media platforms. Launching of trailers with various songs before the film release is doing its bit to excite the public and get them to binge watch the film!

Trailer of Janhvi Kapoor starrer film ‘Gunjan Saxena: The Kargil Girl’ will release tomorrow at 10 am. The actress shared the news with her fans and wrote, “It’s been the most special experience and I couldn’t possibly be more honored and excited  to bring to you the trailer of #GunjanSaxena: The Kargil Girl tomorrow at 10 am. Catch the film on August 12, only on @netflix_in.”

The film is a biopic on the life of Indian Air Force Pilot Gunjan Saxena, the first female and Indian woman airforce pilot in combat along with Srividya Rajan. Gunjan rescued the soldiers during the Kargil War in 1999 and was honoured with Shaurya Vir Award.

The first look of the actress from the film was shared in 2018 and was loved by her fans. The audience is excited see the life inspiring real story of Gunjan Saxena.

The film is directed by Sharan Sharma and is produced under Dharma Productions and Zee Studios. Film also features Pankaj Tripathi and Angad Bedi in supporting roles.  Film will stream on Netflix from 12th August.

Meanwhile, Janhvi will next be seen in movies like ‘Roohi Afzana’ which is a comedy horror film directed by Hardik Mehta. Film stars Rajkummar Rao and Janhvi in lead roles and Varun Sharma in a supporting role.  It tells the story of a ghost who abducts brides on their honeymoons.

She will also be seen in ‘Dostana 2’ which is a romantic comedy directed by Collin D’Cunha. Film will feature Kartik Aaryan, Laksh Lalwani and Janhvi in lead roles. It is a standalone sequel of 2008 film ‘Dostana’.