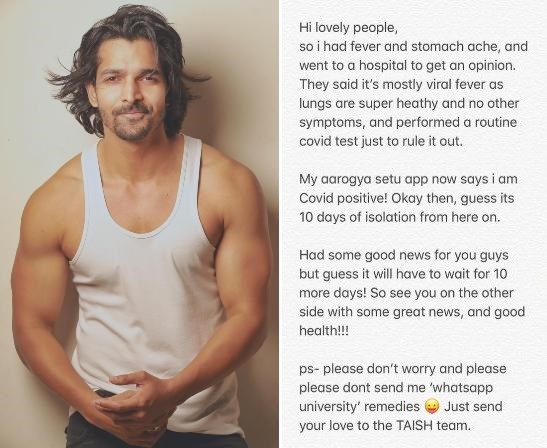 Actor Harshvardhan Rane has tested positive for COVID-19 and is currently under self-isolation, issue at statement on his social media profile.

The Sanam Teri Kasam” actor took to Twitter and issued a statement, which read, “I had fever and stomach ache, and went to a hospital to get an opinion. They said it’s mostly viral fever as lungs are super healthy and no other symptoms, and performed a routine COVID test just to rule it out”

“My Aarogya setu app now says I am COVID positive! Okay then, guess it’s 10 days of isolation from here on…So see you on the other side with some great news, and good health!”

Rane will be next seen in filmmaker Bejoy Nambiar’s “Taish”, which is a forthcoming revenge drama also starring Pulkit Samrat, Kriti Kharbanda and Jim Sarbh in the lead roles.

The film is produced by Bejoy Nambiar and Nishant Pitti.  The film is being released on ZEE5 an over-the-top media service on 29 October 2020 as feature film and as six episode series simultaneously.