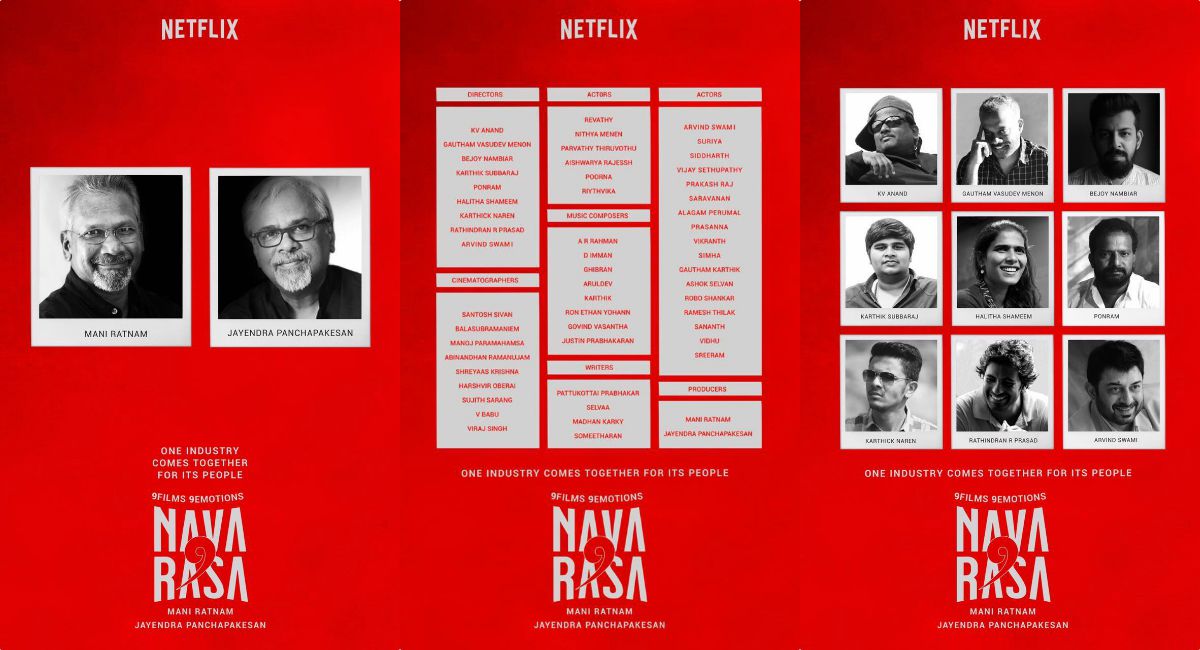 Navarasa brings together the finest talent of the Tamil film industry. In this exciting anthology, nine directors Arvind Swami, Bejoy Nambiar, Gautham Vasudev Menon, KarthikSubbaraj, KarthickNaren, KV Anand, Ponram, Rathindran Prasad and HalithaShameem lend their incredible talent to bring their distinctive perspective on each rasa. The nine short-films feature a stellar line up of over 40 cast and several hundred creative and film technicians. The incredible creative community of Tamil cinema has united to send a strong message of solidarity and resilience and graciously offer their services pro-bono.They will contribute the proceeds from the films towards the well-being of film workers in Tamil cinema impacted by the pandemic.

Speaking on this collaboration, Mani Ratnam and JayendraPanchapakesan said, “We have always loved the idea of brainstorming to come up with unique ideas for raising money for deserving causes. This time, we were brainstorming for the cause of our own industry and to alleviate the agony of our people who had no work for months. The idea of producing short films and raising funds through them was born on one such brainstorming evening. We were thrilled that the idea resonated instantly with all the leading directors, actors and technicians we approached. Navarasa was a spark of an idea when we discussed it. The industry has come together to  passionately transform the nine emotions  into nine films and make it count  for the audiences, the cause, the industry  and  its people. We are happy that Netflix has come forward to take this confluence of emotion, talent, people and the cause to the world.”

Srishti Arya, Director, International Original Film, Netflix India said, “We’re thrilled to be the home to these nine extraordinary films. We admire how this wonderful ensemble of filmmakers and talent have joined hands to support the creative community. Navarasa is a celebration of the craft of filmmaking and the magic of Tamil cinema that we can’t wait to take to the world.”