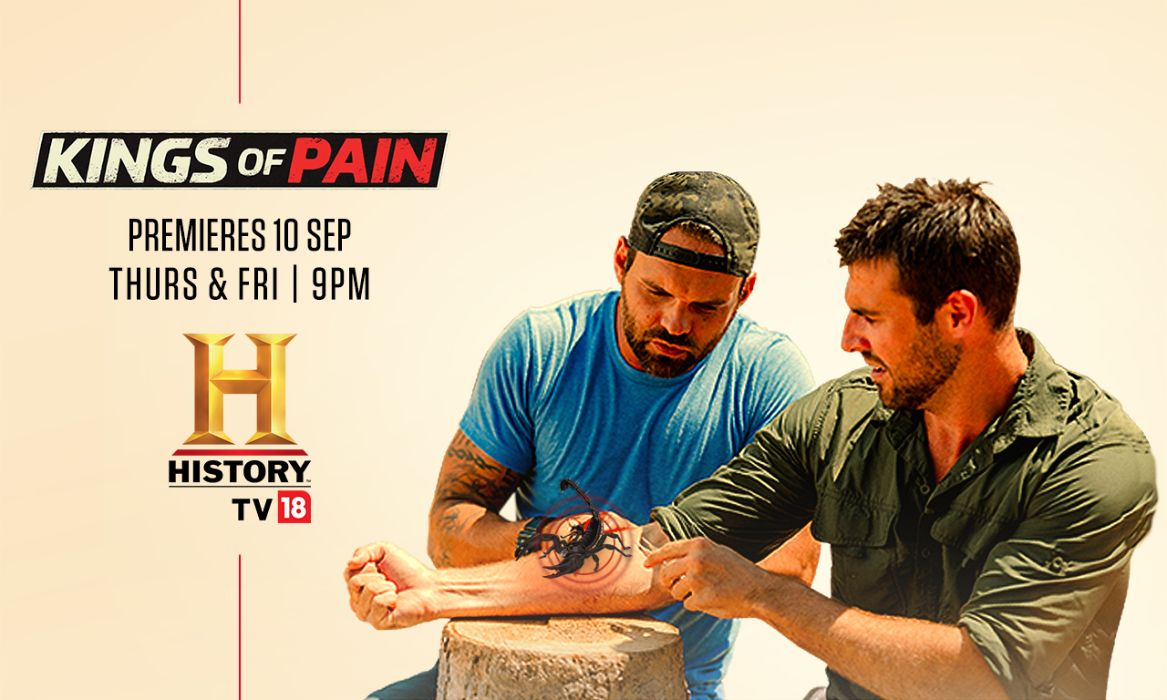 Adam Thorn and “Caveman” Rob willingly get bitten and stung by some of the world’s most dangerous creatures, in a new series starting 10th September, at 9PM.

Imagine taking on some of the planet’s most dangerous animals and vicious insects, with the specific intention of being bitten and stung – all for the sake of science! That’s precisely what wildlife biologist Adam Thorn and professional animal handler Rob “Caveman” Alleva are doing on History TV18’s latest series, ‘Kings of Pain’. The nine-part series, premiering on the 10th of September at 9 PM, follows two of the world’s foremost animal handlers as they willingly suffer intense pain and mortal danger, to create a comprehensive pain index that will eventually help save lives.

Adam and Rob have an exciting past, surviving countless encounters with wild animals and many a brush with death. Biologist, certified snake handler and venom expert, Adam Thorn has been chased by wild elephants, hunted by Asiatic lions, and been nearly strangled to death by a reticulated python. While Rob, who has travelled the world studying exotic creatures, has had a rattlesnake bite that almost killed him. On ‘Kings of Pain’, History TV18’s new show, the daring duo takes on the worst pain that the natural world can throw at them. Their work on a scientific pain index entails putting themselves at the mercy of wild creatures that will inflict almost insufferable agony on the two. On each episode of the series, airing Thursday and Friday nights at 9 PM, they first track and capture a dangerous animal or insect and then get bitten or stung by it. With a doctor on standby, they will then rate the intensity and duration of the pain, the degree of damage that the bite inflicted and other vital factors.

The show builds on the “Schmidt Pain Index” developed by entomologist Dr Justin O. Schmidt. This pain scale measures the pain caused by the bite or sting of 83 different creatures, on a scale from 1 to 4, with poetic descriptions of each sting. Adam and Rob take Schmidt’s pain index much further, adding venomous bites by deadlier creatures and ranking them on a 30-point scale with new categories. This new pain index will eventually be used as an essential educational tool, to determine the creatures that humans should avoid altogether and the procedures that must be followed in the event of a bite or sting.

‘Kings of Pain’, takes Adam and Rob to remote corners of the planet, including Bolivia, Mexico, Africa, Bali, Indonesia, and the Amazon rainforest. In their quest to measure and record pain, they encounter creatures as diverse as the Executioner Wasp, Nile Monitor Lizard, Fire Urchin, Piranhas and a Tarantula Hawk, among others. They also get as close as imaginable with dangerous creatures like the Reticulated Python and a Goliath Bird-eating Tarantula spider. In one episode, while looking for the Nile Monitor Lizard and Velvet Ant of Africa, Adam and Rob are attacked by an even deadlier animal and are lucky to escape with their lives. In another, Rob endures hours of pain after being bitten by the Bullet ant and then dips his blood-soaked arm in a tank full of Piranhas. What follows is heart-stopping, edge-of-your-seats, fact-finding entertainment!

Watch ‘Kings of Pain’ every Thursday and Friday nights at 9 PM, starting on the 10th of September.