I’ll make sure you are happy forever; Vijay Deverakonda wishes mother on her 50th birthday with an adorable video 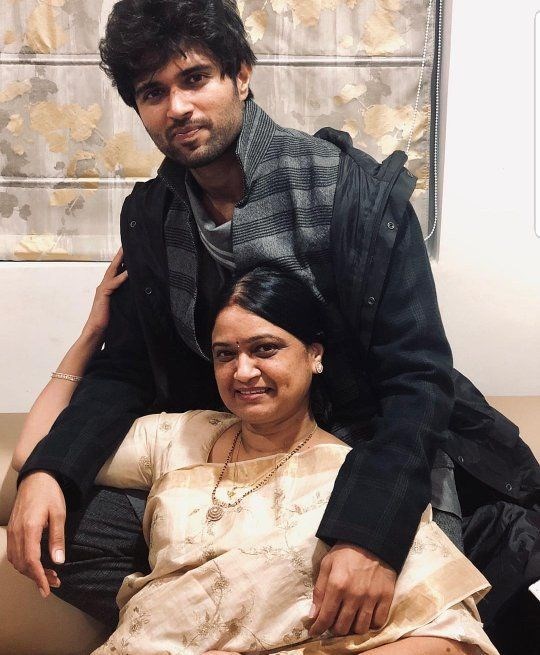 Actor Vijay Deverakonda wished his mother Madhavi on her 50th birthday in the sweetest way possible on Thursday. Sharing an adorable video of himself with his mother and younger brother Anand Deverakonda, the Arjun Reddy star promised that he will keep his mother happy forever.

Vijay Deverakonda took to his Instagram handle to wish his mother on her birthday. He captioned the video as “I’ll make sure you are happy forever. Happy Birthday Mumma! (sic).”

In the video, Vijay Deverakonda’s mother Madhavi can be seen playing a cricketing shot and raising the bat indicating that she is celebrating (half century) her 50th birthday. Vijay Deverakonda, his brother Anand and pet dog Storm were cheering her in the video.

Vijay made his debut as a lead in the 2016 romantic comedy ‘Pelli Choopulu’, which won the National Film Award for Best Feature Film in Telugu and the Filmfare Award for Best Film – Telugu.

Subsequently, Deverakonda has established himself as a leading actor of Telugu cinema by starring in lead roles in critical and commercial successes such as ‘Arjun Reddy’ (2017), ‘Mahanati’ (2018), ‘Geetha Govindam’ (2018), and ‘Taxiwaala’ (2018), some of which rank among the list of highest-grossing Telugu films. His performance in ‘Arjun Reddy’ won him several accolades, including the Filmfare Award for Best Actor – Telugu.

On film front, Deverakonda was last seen in Kranthi Madhav’s romantic drama film ‘World Famous Lover’. He will next be seen in Puri Jagannadh’s ‘Fighter’ which has Ananya Pandey as a female lead. The movie will also be shot in Hindi along with the Telugu language.

I'll make sure you are happy forever; Vijay Deverakonda wishes mother on her 50th birthday with an adorable video
0
Share FacebookWhatsAppLinkedinTwitterPinterestEmailFacebook MessengerTelegramViberPrint