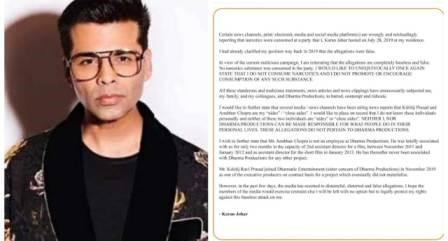 Since late actor, Sushant Singh Rajput’s death case has taken the drug angle bit by bit the claws of NCB are getting hardy on Bollywood. Now the list Of NCB highlights the name of filmmaker Karan Johar. The Dharma Production owner who has been trolled by media in relation to the drug party held in his house has finally broken up his silence. Denying all the allegations Karan issued a statement on Friday on his social media handles. Karan clarified that neither he consumes narcotics nor does he promote the usage of any such substances. These all claims are baseless and false.

As per the reports, NCB had questioned Dharma Productions’ executive producer Kshitij Ravi Prasad and Anubhav Chopra in relation with the drug-nexus in the Hindi film industry. Kshitij was detained after day-long questioning, while Anubhav was allowed to leave late in the evening. But according to Johar, he doesn’t know any of them personally.

Karan on his Instagram wrote, “I had already clarified my position way back in 2019 that the allegations are completely baseless and false. No narcotics substance was consumed in the party. I would like to unequivocally once again state that I do not consume narcotics and I do not promote or encourage consumption of any such substance.

All these slanderous and malicious statements, have unnecessarily subjected me, my family, and my colleagues, and Dharma Productions, to hatred, contempt and ridicule.

I would like to further state that Kshitij Prasad and Anubhav Chopra — I do not know these individuals personally and neither of these two individuals are ‘aides’ or ‘close aides’. Neither I, nor Dharma Productions can be made responsible for what people do in their personal lives. These allegations do not pertain to Dharma Productions.

Mr. Kshitij Ravi Prasad joined Dharmatic in November 2019 as one of the executive producers on contract basis for a project which eventually did not materialise.

However, in the past few days, the media has resorted to distasteful and false allegations. I hope the members of the media would exercise restraint else I will be left with no option but to legally protect my rights against this baseless attack on me.”