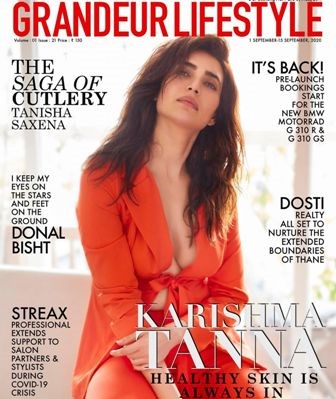 Beautiful and glamorous actress Karishma Tanna is setting some serious “Lady In The Red” goals on the latest cover spread of leading fashion magazine, Grandeur Lifestyle, for the entire month of September.

The official handle of magazine dropped the cover spread on social media, which Karishma Tanna reposted on her profile. She captioned it, “Catch the gorgeous Karishma Tanna on cover this month…Also featuring @donalbisht @bmwmotorrad @streaxprofessional @dosti.realty @the_tanishaa_saxena”

Needless to say, the leggy lass is looking hot and stunning in red-designer outfit and fans just cannot seems to get enough of it!

Karishma Tanna  made her debut with Kyunki Saas Bhi Kabhi Bahu Thi in 2001. She is well known for her roles in Naagarjuna – Ek Yoddha and Qayamat Ki Raat.

She was a contestant and first runner-up in the reality show Bigg Boss, she has also been a participant in shows such as Zara Nachke Dikha, Nach Baliye, Jhalak Dikhhla Jaa and Fear Factor: Khatron Ke Khiladi 10.

Tanna made her film debut as Nandini Thapar in Bollywood industry with Suneel Darshan’s Dosti: Friends Forever. In 2013, she was seen in Indra Kumar’s successful comedy Grand Masti but her real accolade and critical acclaim came from her stunning role in Sanju.