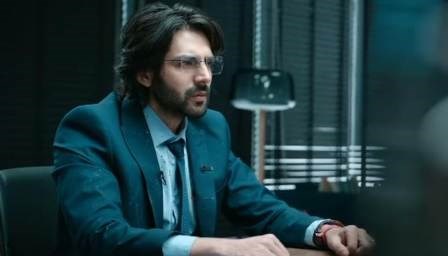 Actor Kartik Aaryan just dropped the first official teaser of his forthcoming Dhamaka, the film will release on Netflix.

Dhamaka’s plot unfolds as a news anchor gets stuck in a situation with a mysterious bomb blast. With the series of ups and downs and events that follow, he must make a choice between his future career or the humanist in him.

The film stars Kartik Aaryan and Mrunal Thakur in the lead roles along with Amruta Subhash, Vikas Kumar, and Vishwajeet Pradhan in pivotal roles.

Dhamaka is directed by Ram Madhvani and Produced by Ronnie Screwvala’s RSVP Movies and Ram Madhvani Films in association with Lotte Cultureworks, Globalgate Entertainment, and Lionsgate. The film will premiere exclusively on Netflix across 190 countries.

Apart from Dhamaka, Kartik Aaryan has an interesting line-up for releases in 2021, he will soon be seen in standalone sequels Bhool Bhulaiyaa 2 and Dostana 2 as well as the follow-ups Sonu Ke Titu Ki Sweety 2, Luka Chuppi Phir Se, and Pyaar Ka Punchnama 3.

He has also signed a three-film deal contract with Eros for a whopping amount of 75 crores, thus becoming the highest-paid young generation actor of Bollywood. Additionally, he will feature in Rohit Dhawan’s Ala Vaikunthapurramuloo, the Hindi remake of Allu Arjun’s Telugu film of the same name, and an action film set in Hong Kong directed by Om Raut.