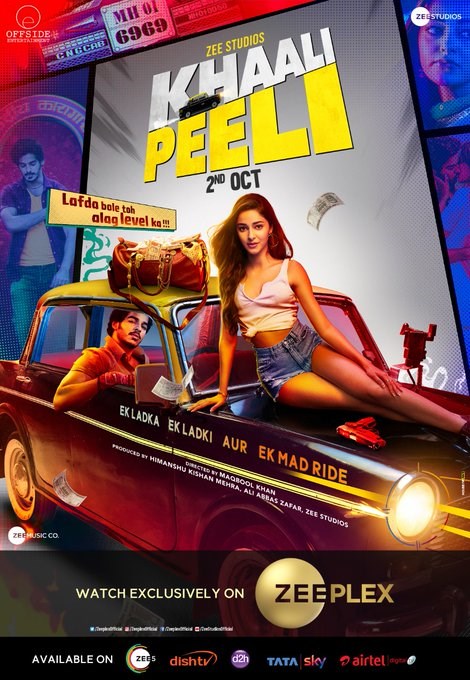 Get ready for an Ekdam Tapori style bindaas thriller in on the cards with this sleek cut preview of this Maqbool Khan movie. Ishan seems to pack in a punch with an all-round show while Ananya looks rock solid in a tailormade role of a Mumbaiyya damsel in distress. Jaideep Ahlawat looks menacing and seems to be at ease playing out the role of a villain.

The movie looks fresh and has been stylishly shot with some chic action and greatly choreographed songs. The lead pair seems to have a great bond and are entirely lovable in this short but fast paced trailer that promises a fun and edgy ride through the streets of Mumbai with some pulsating background score.

The two-minute trailer is full of dhamaal, jhol and bawaal – as we are introduced to the ladka and ladki and the ensuing lafda in their lives as they seem to be running from the law makers as well as breakers in this taut presentation

This wholesome entertainer has been produced by Ali Abbas Zafar and written by Yash Keswani/Sima Aggarwal and set to release on Zee Multiplex.

Zee Plex is India ka Naya Multiplex – a premium pay per view channel where one can see unreleased and new blockbuster movies in multiple languages. They would be following the principle of dynamic pricing for the films making at affordable to the masses at large to experience the magic of cinemas in the comfort of their homes.

The film Khaali Peeli will be priced at Rs.299/-inclusive of all taxes while the Makkal Selvan Vijay Sethupathi starrer Ka Pae Ranasingam is being priced at Rs.199/- all inclusive. Both are making their digital debut on October 2nd.

5 Super Powerful Foods To Increase Your Immunity This Season