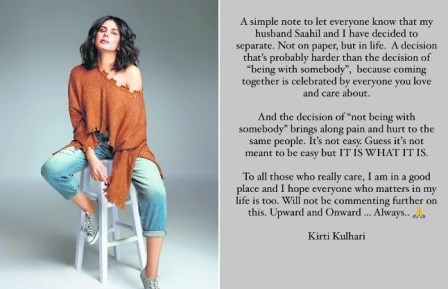 The statement read, “A simple note to let everyone know that my husband Saahil and I have decided to separate. Not on papers, but in life. A decision that’s probably harder than the decision of “being with somebody”, because coming together is celebrated by everyone you love and care about”

“And the decision of “not being with somebody” brings along pain and hurt to the same people. It’s not easy. Guess it’s not meant to be easy but IT IS WHAT IT IS…To all those who really care, I am in a good place and I hope everyone who matters in  my life is too. Will not be commenting further on this. Upward and Onward…Always..Kirti Kulhari” read the full note.

Born in Rajasthan and raised in Mumbai, actor Kulhari married Saahil Sehgal in 2016 and now almost four years later, she has announced separation.

Kirti Kulhari made her acting debut in an Odia film Dharini in 2002. Her first Bollywood appearance was in Khichdi: The Movie in 2010, followed by a role in Shaitaan in 2011. She then appeared in successful films including Pink (2016), Uri: The Surgical Strike (2019) and Mission Mangal (2019).