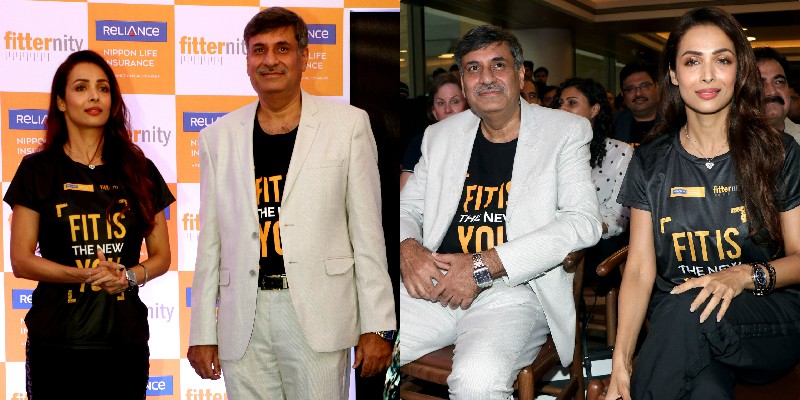 Reliance Nippon Life Insurance company is pleased to present the #WalkPeChal campaign an initiative to promote Walking as a Way to stay fit. It is a wellness initiative aimed at promoting health and wellness amongst citizens of the country. The fast-paced life and quick access to services have led to increased stress and a sedentary lifestyle. This is at the core of increasing instance of lifestyle related ailments.

As a responsible Corporate Citizen, Reliance Nippon Life Insurance Company has embarked on the #WalkPeChal campaign. We are pleased to share that Malaika Arora, who is a fitness enthusiast herself, has graciously agreed to join hands in promoting this campaign. Malaika Arora and Ashish Vohra who is ED and CEO of Reliance Nippon Life Insurance Company officialy launch the campaign at Reliance Centre, Santacruz East. The campaign is conceptualised by Himanshu M Sharma of Joker Films Pvt Ltd.

As per research by the Harvard University, walking improves many of the cardiac risk factors such as cholesterol, blood pressure, diabetes, obesity, vascular stiffness, inflammation and mental stress. It also helps protect against dementia, peripheral artery disease, depression and against some forms of cancer.

Reliance Nippon Life Insurance Company is amongst the leading private sector life insurance companies in India in terms of individual WRP (weighted received premium) and new business WRP. The company is one of the largest non-bank supported private life insurers with over 10 million policy holders, a strong distribution network of 727 branches and 55,492 active advisors as on March 31, 2019. The company’s individual Claim Settlement Ratio, at 97.7% as on March 31, 2019, is amongst the best in the industry. The digital log-ins for the company stands at 74% as of March 31, 2019, as against 53% same time last year, clearly indicating the heavy digitisation focus.