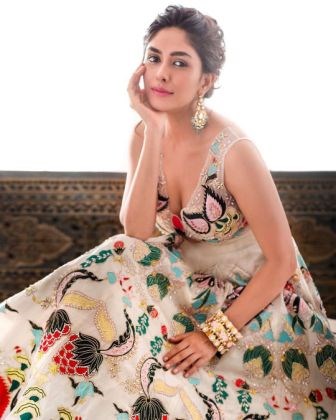 Mrunal Thakur has slowly and slowly fitted herself into the film industry. She started her career in the telly town and now she is a known face of bollywood. The actress’s instagram game is always bang on! She recently shared a photo of hers which is being adored by her fans.

The ‘Batla House’ actress looks resplendent and mesmerising in this picture.Her fans are going gaga over her beauty. The actress is also seen on the cover page of the 9th edition of Aza Magazine for which she shared some looks on her instagram account recently. She looks glowing and glittering on the cover page and she fully owns it with panache!

The actress who started her career in the year 2012 with a tv show has come a long way. She has impressed the audience with her acting skills and today she is considered amongst the most promising actresses in bollywood. Her bollywood debut was in the year 2018 with the film ‘Love Sonia’ and through her first film only she showed everyone that she is here to stay!

On the work front, Mrunal has a list of films in her kitty.  She will be soon seen in the film ‘Jersey’ opposite Shahid Kapoor. It is a sports drama film directed by Gowtam Tinnanuri. The film is adapted from the telugu film of the same title.

She will also be seen opposite Farhan Akhtar in the film ‘Toofan’ which is again a sports film directed by Rakeysh Omprakash Mehra. Farhan will be seen portraying the role of a national level boxer in the film. The film also stars Paresh Rawal in a prominent role.

Mrunal will also be a part of upcoming comedy film titled ‘Aankh Micholi’ which is directed by Umesh Shukla. The film revolves around a family of misfits and stars Abhimanyu Dassani opposite her.

When Naseeruddin Shah Was Made Aware Of Being Muslim