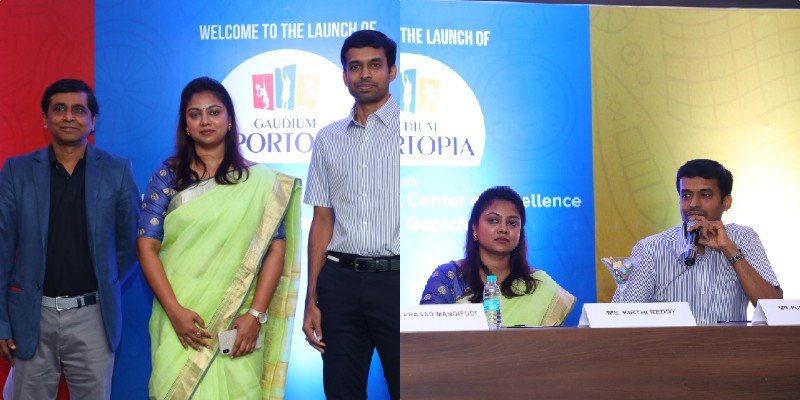 Investment of 180cr to build 25 + specialized sports academies by 2020

India’s top athletes and Olympic Medallists to mentor the students

Sport remains indispensable in inculcating a child with discipline, respect and the need to work hard, besides helping in the physical and mental growth. Hence Gaudium Sportopia will be aiming to provide education with a difference for the first time in India.

“The Gaudium’s mission is to sculpt happy minds by providing the opportunity to explore and the resources to excel in any field the child feels passionate about, be it arts, sports or academic excellence. Gaudium Sportopia is one such initiative to cater to those children who are passionate about sports and those with tremendous potential to excel. The vision here is to provide a conducive environment to produce future champions by bringing on board proven champions to coach and mentor these children to ensure a sporting future for India,” said Ms Kirthi Reddy, Director & Founder of The Gaudium school and Gaudium Sportopia.

To achieve this purpose, out of a mammoth total investment of 180 crores INR, 45 cr will go into building Gaudium Sportopia with 25+ sports academies fully equipped built on18 acres of land dedicated to indoor and outdoor sports.

The state-of-the-art sports facilities will be aiming to groom about 2000 students across various sports that will change the entire sporting ecosystem in the country.

glorious sports career. At the Badminton Gurukul Centre of Excellence, Gopichand’s expertise as a top shuttler and a celebrated coach will help to nurture hundreds of students in introductory, intermediate and advanced levels.

“I had this vision to create champions in the grassroots and what better can it be when we are joining hands with people who think that sport is a key element of education and overall development of a child? With stronger grassroots, India will be one step ahead as it aims to become a global superpower in sports,” said Gopichand, India’s Chief National Badminton Coach.

In the eight courts available at this centre, students can dream of replicating the heroics of Olympic medallists like Saina Nehwal and PV Sindhu as they train under the watchful eyes of the former All England Open champion.

It will be one of the many centres under this unique project that is targeting to be fully operational by 2020. On completion, Gaudium Sportopia will have 600 student capacity hostels so that students from all parts of the country can join the school to pursue the sport of their choice as well as education under a single roof through its ‘Professional Sports Career Program’ — a first for India.

“I am so happy to be part of such an amazing initiative like Gaudium Sportopia. We are hoping to manage it in the most professional way with all best practices so that it will set a benchmark. We have envisioned the ideas to bring out the best in every child at Gaudium Sportopia and ensure that they become a champion in life,” said Prasad Mangipudi, Strategic Consultant for Gaudium Sportopia.

Inclusion of a high-performance centre and a high-end gym will prepare them for the rigours of the sports world. Pitting the students against each other in regular tournaments conducted by Gaudium Sportopia will bring out their competitive spirit and enhance their urge to excel.

By ensuring that students with serious potential to become champions don’t miss out on the academics, Gaudium Sportopia will instil faith in parents to enrol their kids in this unprecedented enterprise, thereby creating a serious sports culture for the future in the nation.