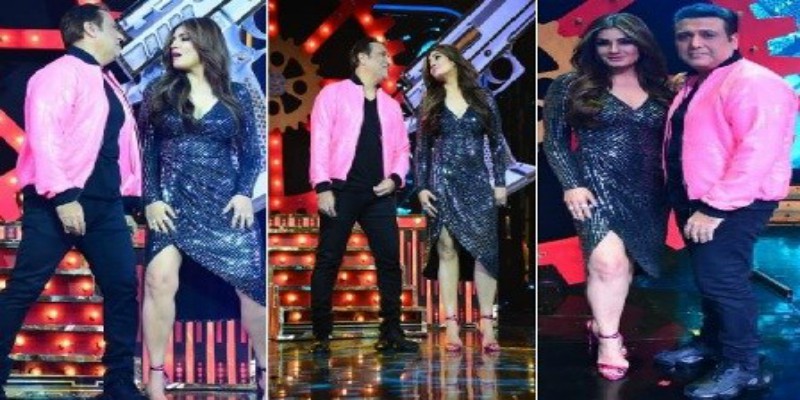 Nach Baliye Season 9 is going on entertaining the audience with full force. Every week, there’s a twist or a surprise keeping the viewers always engaged with the show, and this week it was the theme- ‘Hum Tum aur Woh’. To add the cherry to the cake, the show had Govinda on the show along with his wife Suneeta, and since Raveena and Govinda are the super hit pair of the 90’s, it all added up to the theme.

Raveena and Govinda, raking up the nostalgia took the audience down the memory lane by recreating the iconic blockbuster song ‘Ankhiyon se goli maare’ from the film ‘Dulhe Raja’. The makers had requested them to perform on this song and they danced to the tunes of this song bang on. The performance was full-on energy, the superstars were completely in sync with their steps and needless to say, it was a treat to watch Raveena and Govinda perform together once again.

Govinda, who was the yesteryear dancing superstar has the same charms as he did and Raveena had the same charisma concluding the fact that nothing has changed when it comes to the duo who were a cultural phenomenon in the 90’. The song continues to make the audience jump on their seats and dance and it’s still a chartbuster. To have the duo perform on it was a visual treat and once in a lifetime type of nostalgia.

The theme ‘Pati Patni aur Woh’ is the twist of the week and saw the contestants bringing their own take of the concept to the table. The performances were vibrant, to say the least, and the competition is on in full swing. On top of everything, watching Govinda and Raveena perform on a song which has achieved legendary status, gave them all the more inspiration and energy to do their best.

Nach Baliye season 9 is being produced by Salman Khan and airs every Saturday and Sunday, 8 PM on Star Plus.

Show your Sister some love this Rakhi with CONFLUENCE by Swarovski