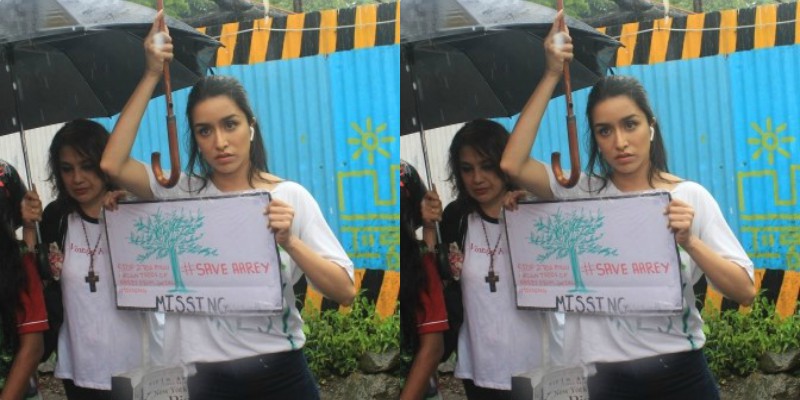 Saaho leading lady Shraddha Kapoor took to street protest to save Aarey Forest and calls the cutting on trees, “Unacceptable and Shocking”

People of Mumbai took to streets and organized a series public demonstration to protest the proposal to cut more than 2,000 trees in Aarey forest in the wake of ‘Tree Authority’ (TA) approval to cut 2,185 trees and transplant 461 trees from the Aarey forest for the construction of the Metro car shed.

Shraddha Kapoor joined the protestor and stood against the proposed cutting of trees. She took to her social media profile and wrote, “Trying to do my bit. Went live on my insta sometime back to show you all how so many people have come together to stand up against this. 2700+ trees are slated to be chopped down for the Metro. Unacceptable. Shocking”

“As if we don’t have enough environmental issues already. As if Mumbai doesn’t have enough pollution already. And permission is granted to chop off the lungs of the city. This HAS TO STOP. #SAVEAAREY #TRYYOURBITFORTHEENVIRONMENT @aareyforest”

Meanwhile, on the work front, Shraddha Kapoor’s latest Saaho is making massive progress at the box-office despite harsh and negative reviews.

Next, she will be seen in multi-starrer Chhichhore, which is helmed by Nitesh Tiwari and stars Sushant Singh Rajput, Prateik Babbar, Tahir Raj Bhasin, Naveen Polishetty, Tushar Pandey, Varun Sharma and Nalneesh Neel in leading roles. The film is produced by Sajid Nadiadwala and Fox Star Studios.