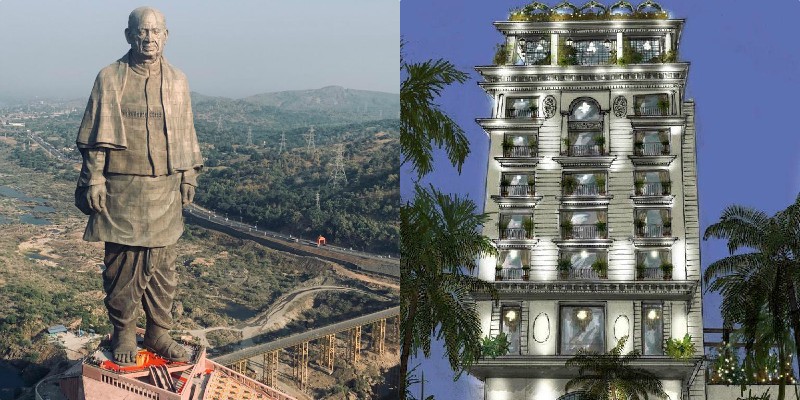 We all might have wondered about the height of the Statue of Unity. It is one of the feelings of pride in India which has been added up recently. The Statue of Unity which is the world’s tallest statue is a tribute to Sardar Vallabhbhai Patel, who was Independent India’s first home minister as well as deputy Prime Minister. Patel was one of the prominent leaders of the Indian freedom movement popularly known as the “Iron Man of India” and was responsible for the integration of several princely states into modern India. Did you know the 597 ft tall Statue of Unity in Gujarat and Mumbai’s Soho House have been featured by Time magazine? Yes! They are listed in the second annual list of the 2019 World’s greatest places. They are also known to be note-worthy destinations to wonder now!

The statue standing tall at 597 ft on an island in the Narmada River, is the statue that towers over the Sardar Sarovar Dam in Gujarat and it offers the visitors to have a chance to see views of the mountain ranges situated nearby from its chest. The tourists will pay homage to Sardar Vallabh Bhai Patel, who became India’s first deputy Prime Minister in 1947. It is now emerging as one of the popular tourist spots in India and is serving staggering views. It is said that the structure of the ‘Statue of Unity’ is aimed to awe-inspire the generations and displays Patel’s vision of unity, patriotism, including growth and good governance. And it is recorded that 2.06 million people have visited the statue until now.

Next, Mumbai’s chic Soho House which is located in an 11-storey building in a way it overlooks the Arabian Sea. It is inhabited with a library, a cinema with 34 seats and a rooftop bar and pool and is known to be Asia’s first Soho House right here in India. You will get the essence of block-printed fabrics from Rajasthan, handwoven cane furniture, pleasant environment, sari-coated lampshades and also some 200 art pieces by mostly South Asian artists.

And this featuring of the Statue of Unity and Mumbai’s Soho House amongst the world’s best destinations list. Ensure you have visited these famously unique places over here in India!

BANANA for a silky shiny hair, Can you believe? Check out