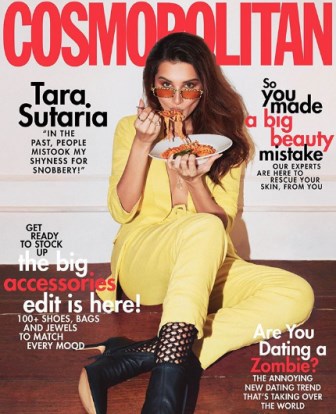 Newbie Tara Sutaria is looking pretty and gorgeous on the latest cover spread of Cosmopolitan India, for which the actress has turned a make-up artists as well as cover girl.

Though she is only two movies old, Tara has managed to create quite the buzz around herself. The actress made waves with her performances in Student of the Year 2 and Marjaavaan and is today serving as fashion inspiration for all the millennials.

The actress features on the cover of Cosmopolitan magazine serving as style inspiration yet again. She looked every bit of a diva in the yellow pantsuit from Vero Moda. Tara dropped the cover spread on her instagram page. She captioned it, “At home with @cosmoindia”

Tara also confirmed that she has styled herself for the cover spread. Tara also made a sharp statement by pairing this sunshine yellow number with black mesh boots and, stacked up metallic rings, a long golden chain and a pair of stylish sunglasses, that added an edge to her look.

Meanwhile on the work front, Tara will next be seen in Tadap, which is an upcoming romantic action film directed by Milan Luthria and produced by Sajid Nadiadwala.

The film marks the acting debut of Ahan Shetty, son of Suniel Shetty. The film is a remake of 2018 Telugu film RX 100.