The Sky Is Pink Trailer Out Tomorrow 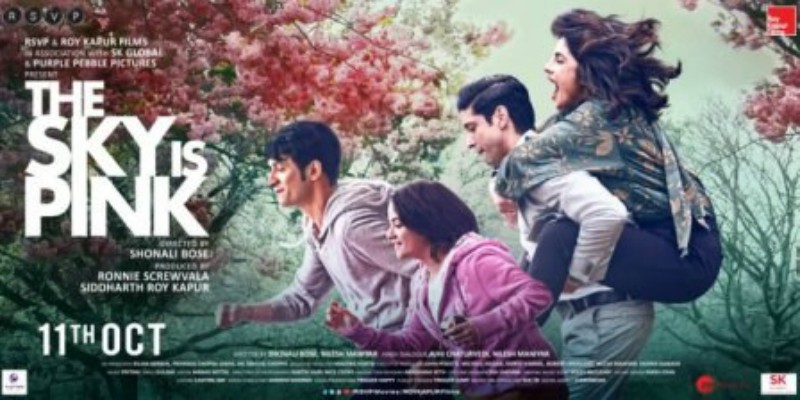 Actress Priyanka Chopra, Farhan Akhtar and Zaira Wasim starrer “The Sky Is Pink” had its world premiere at prestigious Toronto International Film Festival, and now the makers are planning to drop the trailer in India.

The official handle of Roy Kapur Films just dropped a new poster of the film and confirmed that the trailer for the film will be out tomorrow. They wrote, “In this family, crazy doesn’t skip a generation! We bring to you #TheSkyIsPink trailer Tomorrow at 10 AM! @priyankachopra @FarOutAkhtar @ZairaWasimmm #RohitSaraf #ShonaliBose @RonnieScrewvala @rsvpmovies #SiddharthRoyKapur @PurplePebblePic #SKGlobal”

The Sky Is Pink is a biographical film directed by Shonali Bose and co-produced by Siddharth Roy Kapur, Ronnie Screwvala and Chopra under the banner of RSVP Movies, Roy Kapur Films, and Purple Pebble Pictures.

The film is the return of Chopra after a break of three years from Bollywood. It is based on the love story of a couple spanning 25 years, told through the lens of their spunky teenage daughter – Aisha Chaudhary, who was diagnosed with a terminal illness.

The Sky Is Pink is the sixth collaboration between Priyanka Chopra, Ronnie Screwvala and Siddharth Roy Kapur. The trio earlier worked together in films like Fashion, Kaminey, What’s Your Rashee, Saat Khoon Maaf and Barfi!.

The film will be released theatrically worldwide on 11 October.