The World of Wonders, Undavalli Caves of Andhra Pradesh

Prod into the Undavalli Caves of Andhra Pradesh!

Awe-inspiring ambiance waits for you!

Located in Undavalli of Guntur district at Andhra Pradesh in India, Undavalli Caves is a monolithic example of Indian rock-cut architecture and is also known to be one of the finest testimonials of ancient Viswakarma sthapathis. It is located 6 km southwest from Vijayawada and is one of the highly protected monuments of national importance.

Did you know that the caves are carved out of solid sandstone? If not, just read to know about it. And Yes! the caves are carved out of the solid sandstone on a hillside in the 4th to 5th centuries AD. The beauty and jaw-dropping structures and constructions stand as the evidence for the incomparable architectural skills of the ancient Viswakarma sthapathis or the temple architects and builders. The caves leave you in wonderment and pride about India’s advanced culture during the ancient and medieval times.

Undavalli Caves are a most unique place in India and also many small caves been breathing at the banks of Krishna River. Undavalli Caves were excavated as mentioned before in 4-5th CE during the reign of King Vishnukundi. And they were under royal patronage until about 16th CE after which they remain unused. As of now, they are a part of ASI assets and a national heritage. 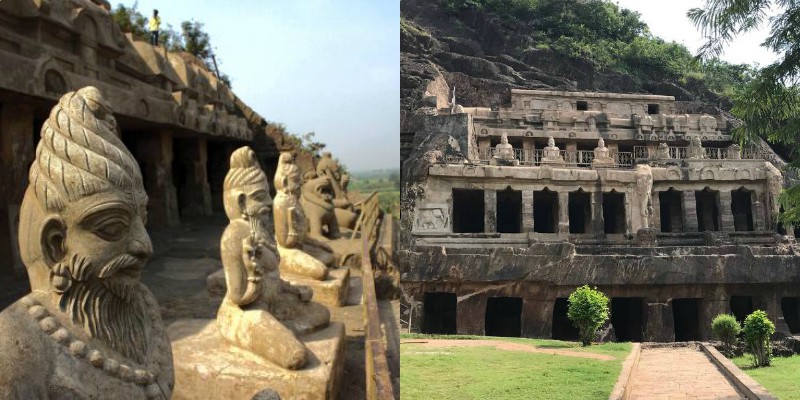 They are set of caves excavated on a rocky-stony hill overlooking the encompassed lush green fields. Yet the main cave is a four-story cave which is neatly carved with chambers along with classical pillars. And this mesmerizes the visitors and will lead to the exploration of caves further. When you enter the smaller cave, it has three openings and a carved panel on top of it. There are elephants and lions carved on the panel.

Now, above it is an alcove incorporated with a carved statue of Vishnu. The small cave thus leads to the massive 4 storey caves paving way for its majestic appearance. The top part of the cave is painted mostly and what strikes you the most is the life-sized idols of four saints sitting on the 3rd floor of the balcony. One could wonder by looking at the idols and may have a question as to what are they depicting? But we do not know the exact news about the sculptures and no more information has been written.

Each level of the cave looks stupefying and staggering alongside. Every level of the caves is clearly visible. The base level is incomplete and shows you a bit about how caves are used to be excavated. Present architectures can never withstand the ancient architectural forms and you will probably wonder at the site of the caves. The pillars exhibit the stylistic similarities with the Vijayanagar style but these caves are said to be inspired by the excavation of Mahabalipuram caves. The primary statue of these particular caves is Sheshashayee Vishnu. As the Vishnu sculpture lies in a sleeping position, the giant Garuda sculpture is sitting on the Vishnu sculpture as if keeping an eye on Vishnu.

Another interesting fact is that the elephant is the key motif in many sculptures at this Undavalli caves. There are as many sculptures of deities and you have an aesthetic thing to wonder at. The aura of the place is also seen quintessential serene and probably you could explore several ancient things at the tranquil cave. This tremendous cave will be the best place for the history seekers and travelers as well.

Dive into the aesthetic surroundings of Undavalli!