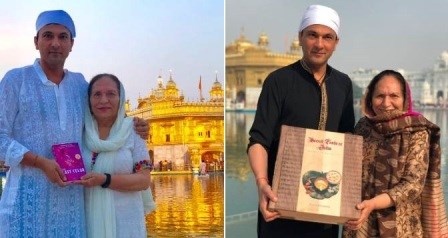 Chef Vikas Khanna has emerged as a savior for many Indians during the tough times of Covid-19. The world-renowned chef has been coordinating a massive food distribution drive since the time India was hit by the deadly Coronavirus. He along with his team has distributed 27 million meals in the country and dedicated the 27 Millionth meal to the Golden Temple.

The chef and author took to his twitter account and shared this good news with his fans all over the world. He wrote, “27 Millionth Meal Dedicated to my HOME. The place where I belong, my roots, and my heritage. Sri Harmandir Sahib Ji. The Golden Temple”

Vikas Khanna who has changed the mindsets of people about Indian chefs all over the world as he represents the country in the global dining scenario was born in Amritsar and he dedicated the 27th Millionth meal to his roots, his heritage, his hometown.

He and his team has been distributing meals in various orphanages, old-age homes, leprosy centers, transgender, AIDS patients, film industry workers, widow ashrams as well as to migrant workers and hundreds of thousands of people in need all across the country.

Earlier this month, on the eve of Raksha Bandhan, he dedicated the 25 Millionth meals to Lata Mangeshkar whom he considers to be his spiritual sister, guide, and someone who he looks up to!

Kudos to Vikas Khanna for this great initiative!