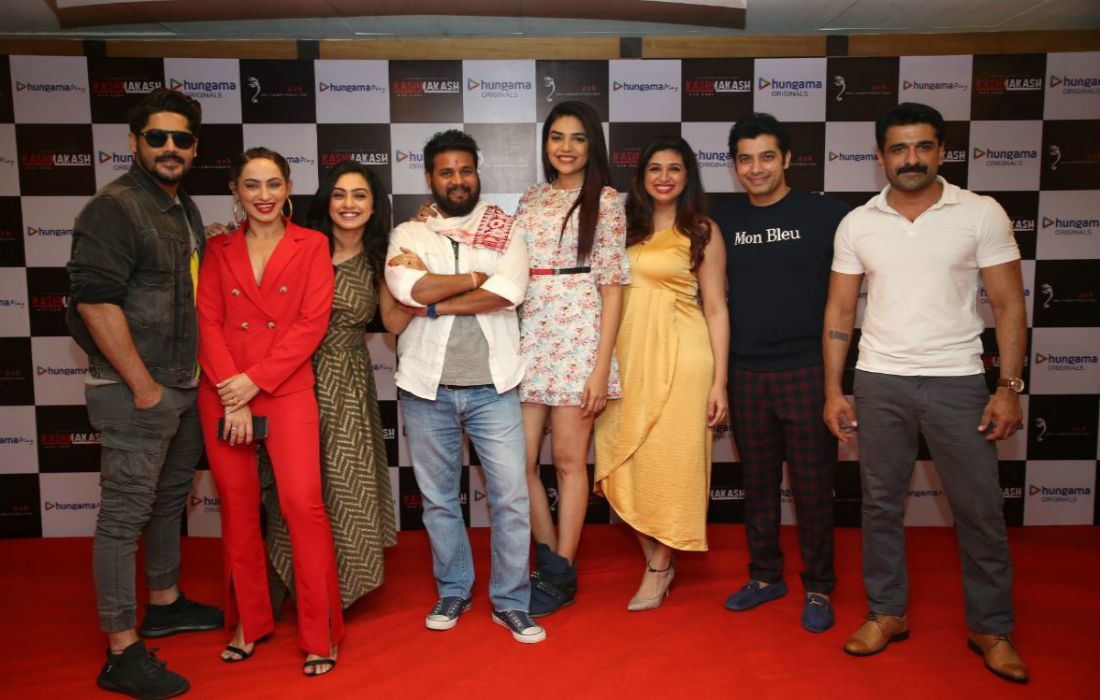 Produced by Anil V Kumar Productions in association with Hungama Digital Media, the show is available to stream on Hungama Play and partner networks from 25th February 2020 onwards

Hungama Play, a leading video on demand platform owned by Hungama Digital Media, today launched ‘Kashmakash’, a new Hungama Original. An anthology with 5 individual stories, the show highlights a unique modern-day crime in every episode and the dilemma that the victims go through when choosing between right and wrong.  The show features an ensemble cast comprising some of the biggest actors from the television industry. This includes Sharad Malhotra, Anjum Fakih, Eijaz Khan, Abhishek Kapur, Abigail Pande, Lavina Tandon and Vahbiz Dorabjee, among others. Produced by Anil V Kumar Productions in association with Hungama Digital Media, different episodes have been directed by Anil V Kumar, Shiva Verma, Saptaraj Chakraborty and Saket N Yadav.

Narrated from the victims’ perspectives, Kashmakash brings to fore crimes that are becoming increasingly common in the modern world – a housewife who finds stardom on a social app and in the process, unwelcome attention; a celebrity couple that falls prey to their desire of giving the online world unrestricted access to their lives; a social media influencer who refuses to come to terms with her mental disorder and finds herself at the mercy of a blackmailer; a drug addict who is unable to quit and goes on a downward spiral when she makes a shocking discovery; the admin of a village WhatsApp group who peddles in fake news without realising its far-reaching impact. Each episode of the show features an alternate ending, highlighting two ways to deal with a crime, one right and another wrong.

Speaking about the show, Siddhartha Roy, COO, Hungama Digital Media said, “With Hungama Originals, we have created some of the most distinctive shows offering clutter-breaking narratives that are rooted in local culture, yet have a universal appeal. Kashmakash is our first anthology series and combines an engaging storytelling technique with powerful performances to highlight crimes that have become extremely common in contemporary India. We are certain that our distribution strategy will help us deliver the show to a wide audience while the relatability of the content will make it appealing for viewers across geographies.”

Speaking about the series, Anil V Kumar, Founder, Anil V Kumar Productions said, “The concept of the series sets it apart from others. While it essays what the victims go through, it also showcases how an alternate approach could have resolved the problem. Ensuring that each story is equally intriguing was a challenging task but the process of making this show was enriching and creatively fulfilling. I hope that the audiences enjoy watching the show as much as we enjoyed making it.”

Starting today, the show will be available to stream on Hungama Play, Hungama’s video on demand platform. Hungama will leverage its robust distribution network to deliver the show to an audience over 150 million worldwide. Kashmakash will also be available to stream through Hungama Play on Vodafone Play, Idea Movies & TV, Airtel Xstream App, Amazon Fire TV Stick, Tata Sky Binge, MX Player and Android TVs. Additionally, Hungama’s association with Xiaomi will enable consumers to watch the show via Hungama Play on Mi TV.

Speaking about the show, Sharad Malhotra said, “This show is unique because it not only tells the story of the victim but also highlights how each story could have ended differently had the person made the right choice. Kashmakash teaches a lesson without being preachy and that is a huge win for this show. I am glad to have been a part of such an exciting story with a unique narrative. I am also happy to have worked with Anil V Kumar Productions and Hungama Play.”

Anjum Faikh said, “The digital medium has offered performers and storytellers a platform to experiment with different styles of storytelling and acting. I am a part of two stories in the show and each story highlights a different kind of crime. While one is about the impact of fake news, the other warns the audiences about the consequences of oversharing on social media. I am certain that the audiences will enjoy the show’s unique perspective on modern-day crimes.”

Elaborating on the show, Eijaz Khan said, “Kashmakash is a unique series that captures crimes in a compelling manner, making it a binge-worthy show. The show’s dual-ending approach is a fresh and modern way to express how one decision or action can have such a deep impact on our lives and those of others. I hope the show receives love and appreciation from the audience.”

Abhishek Kapur said, “Kashmakash is very special to me because the show highlights the experiences of the victim and showcases life-changing realities. Each story in the show captures the crimes in a relatable manner helping the audience understand that what they are seeing on-screen could actually happen to anyone. Each episode ends with an insightful takeaway for the audience.”

Abigail Pande said, “It is wonderful to have worked on such an enthralling show. The stories are quite relatable and real. I hope that the audience understands the message each episode is trying to convey. Every story is a new learning and will help the audience comprehend the impact of every action that they take in life.”

Lavina Tandon said, “Kashmakash is a unique show that not only tells a story but also showcases its outcome. Every episode asks the audience to decide what the right path would be. It was wonderful to collaborate with the cast and crew of the show, while also creating an interesting concept that hasn’t been explored so far.”

Vahbiz Dorabjee said, “The crime stories highlighted in the show open one’s eyes to what’s happening around us. The alternate endings are a unique approach that is sure to keep the audiences engrossed. I am glad to have been a part of the show and look forward to the audience’s reactions.”