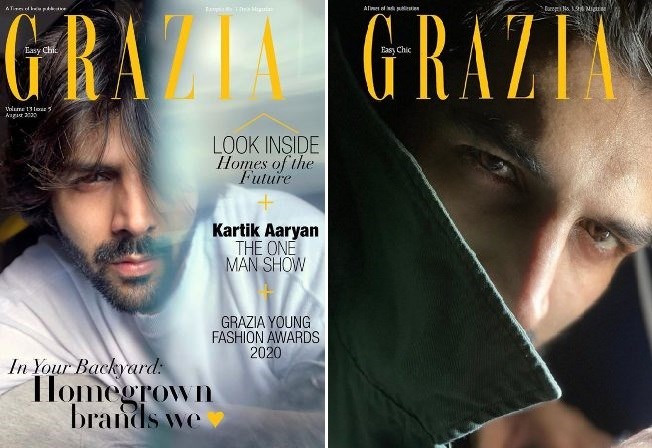 My Family Is My Inspiration Says Vardhan Puri

Actor Kartik Aaryan is setting some serious retro cool vibes on the latest cover spread of Grazia Magazine. Our most loved heartthrob Kartik has turned into the cover boy for Grazia, sporting an over coat and cool stare!

The actor took to his social media profile and shared the cover page. He captiond it, “Bas Aankhein hi Kaafi hain…Shot at home by @dr.kiki_…@graziaindia August 2020 #CoverStar”

Kartik is seen posing for cams with a collar-high overcoat and it’s been shot by his sister Dr Kiki, definitely a family effort at play here! The official handle of Grazia also shared a different spread, they captioned it, “Kartik Calling Kartik: Stardom may not have changed his life overnight, but @kartikaaryan’s rise to the top has begun, and there’s no stopping him now. @dr.kiki_ @radhika.yellow #KartikAaryan #CoverStar #GraziaIndia #August2020”

Aaryan will next star in standalone sequels to the 2007 comedy horror film Bhool Bhulaiyaa and the 2008 romantic comedy Dostana, entitled Bhool Bhulaiyaa 2 and Dostana 2, respectively.

He has also committed to headline an as-yet untitled action film directed by Om Raut.