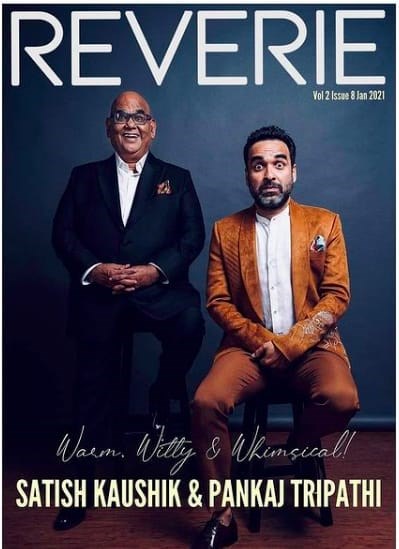 The man who transformed the real estate sector

Pankaj Tripathi is the most wanted star of bollywood right now. From web world to film business, he has left his mark everywhere and today people watch the content because of his presence. The actor’s latest film ‘Kaagaz’ is getting amazing response and now the film’s director and actor duo Satish Kaushik and Pankaj Tripathi grace the cover page of Reverie magazine January issue.

The duo is completely complementing the tagline given to them in the photo ‘Warm, Witty and Whimsical’.

The film is based on life and struggle of Lal Bihari, a farmer from the small village of Amilo Mubarakpur, who was declared dead on official papers.

2020 was the year for Pankaj Tripathi with five film releases and two web shows. His back to back fabulous performances have earned him great love and fan following.

On the work front, he has a list of films to be released in 2021. He will soon be seen in Dibakar Banerjee’s ‘Sandeep and Pinky Faraar’, Kabir Khan’s ’83’, Sanjay Gupta’s ‘Mumbai Saga’ and Farhad Samji’s ‘Bachchan Pandey’.