One of India’s most significant and well-known holidays is Dussehra, also known as Vijaya Dashami. It is generally observed in October or September and is accompanied by a festive mood and a variety of joy. In the battle between Lord Ram and the ten-headed Ravana, who might have kidnapped Sitadevi, Dussehra represents the triumph of good over evil. Some people also hold the opinion that Goddess Durga vanquished Mahishasura, a formidable demon who led the asuras (demons) in a war against the gods and ultimately succeeded in defeating them. Several such mythologies and stories can be heard throughout India. In every state of India, the festival is observed to be celebrated in a distinctive and extravagant manner. Here are some of the best places to celebrate Dussehra in India. When Durga Puja or Dussehra is observed, Kolkata truly lives up to its nickname, “City of Joy.” Attending Bijoya and Durga Puja in Kolkata, or even in other areas of West Bengal, is a journey in and of itself. This festival is noteworthy because of the Dhunuchi choreography, bhog, stunning pandals, as well as outstanding Durga idols. You have the option of visiting mansions like Sovabazar Raj Bari as well as Rani Rashmoni Bari to see the classical side of the Puja.

You may also like: 5 Places that Never See Nights

You must go to Ahmedabad to experience the most enjoyable aspect of Navratri. With the vibrant Chaniya-Choli, Kediyus, as well as Kafni pyjamas decorating the city, Navratri is in full swing. The lively Garba dance only adds to the festive mood. The Gujarati people’s “Aarti” in honour of the Mother Goddess is another event to see in Ahmedabad at this time. Thousands of individuals dance in a circle around the earthen lights to celebrate the triumph of good over evil. 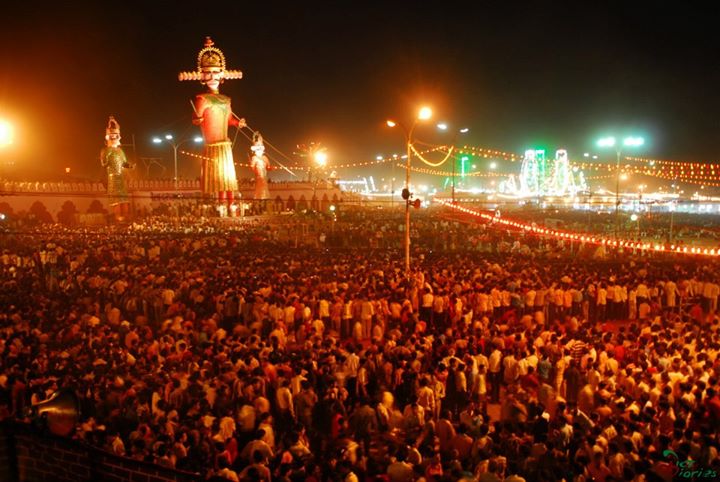 During Dussehra, the Dussehra Fair in Kota is the most fascinating event. While Maharaj Durjanshal Singh Hada was in power, the custom of holding the fair was first established in the year 1723 AD. Participating in the fair is a wonderful experience, filled with everything from live performances to booths selling delicious food, costume plays to fireworks displays. Massive relics of Ravana are lit on fire on the occasion of Vijayadashami. Following that are the Moustache contest, Mushairas, as well as Kavi Sammelan.

Kullu, a stunning area of Himachal Pradesh known as the “Valley of Gods,” is another location that should be added to the list. This week-long festival, which draws more than 4,5 lakh tourists annually, was designated a worldwide event in 1972. It is a holiday commemorating the triumph of good over evil, and in this state, Dussehra begins as most other Indian festivals are coming to an end. One of the most notable aspects of this celebration is the procession that begins with the carrying of Lord Ram or Raghunath’s idol by worshippers around the town. It then ends at the River Beas. The lovely surroundings and weather enhance the revenant atmosphere of the Kullu Dussehra. Dussehra celebrations in Delhi must be grand and spectacular because the city is dramatic in and of itself. Related to just how Lord Ram, as well as his brother Laxman, vanquished the demon king Ravana, this festival is significant because it celebrates the triumph of good over evil and love over hate. The Ramlila musical, which features locals from the city acting out the entire Ramayana, is one of the most well-known events that take place. There are many places to watch Ramlila, including Ramlila Maidan, Subhash Maidan, Lal Qila Maidan, Dwaraka Ground, as well as Red Fort Lawn. Additionally, you can participate in Durga Puja celebrations at the pandals (covered structures) in the area and even explore the musical dance events held in the city.

Where are you planning on celebrating this year’s Dussehra and is it going to be in any of one of these places? Let us know!

Why Celebrations are Incomplete Without Champagne?

5 Greatest Benefits of Taking Family Vacations You Should Know