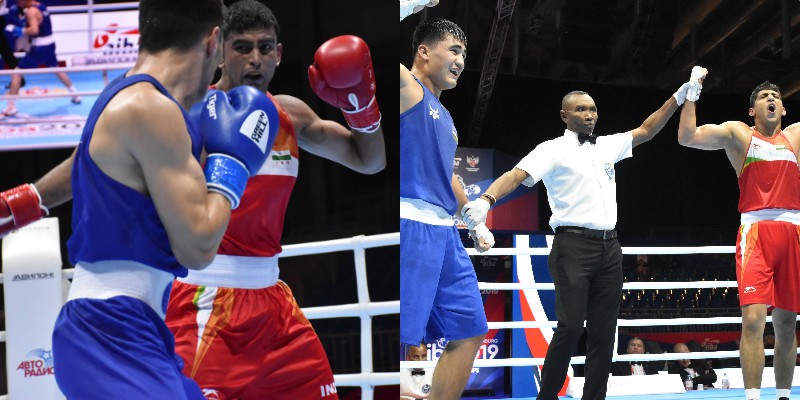 New Delhi, September 17: Commonwealth Games silver medallist Manish Kaushik (63kg) was the standout performer of the day as three Indian boxers entered the quarter-finals and are now one win away from a medal at the AIBA Men’s World Championships in Ekaterinburg, Russia on Tuesday. Joining Kaushik in the last-eight stage were Asian Games gold medallist Amit Panghal (52kg) and Sanjeet (91kg).

The former India Open champion Kaushik showed strong resolve in a very tricky pre-quarter-final bout against Baatarsukh Chinzorig of Mongolia, a No. 4 seed and 2018 Asian Games silver medallist. Using his pace and power perfectly, Manish landed some strong punches on his accomplished opponent to secure a unanimous 5-0 win.

“It was a really good bout against the reigning Asian Games silver medallist. I sat with my coaches and devised a strategy for him and I played with that strategy throughout the bout,” said an elated Kaushik after the bout.

“I am glad that it worked out. I am really looking forward to tomorrow’s bout as I will become a World medallist if I win tomorrow. I will watch my opponent’s videos with my coaches and fellow boxers and make a strategy accordingly.”

Up next for Kaushik in his quest for a maiden medal from the world event is Brazil’s Wanderson de Oliveira.

For the second edition in a row, Asian Championships gold medallist Amit Panghal reached the quarter-finals of the World Championships. As the second seed, he was the favourite against Turkey’s Batuhan Citfci in 52kg and he lived up to the expectations when he soared to a comprehensive 5-0 victory. It set up a quarter-final showdown with Caarlo Palam of Philippines, whom he had defeated at the Asian Games last year.

“My opponent was an experienced boxer and playing him was a good experience for me,” said the top medal hope, who dedicated his win to the Hon’ble Prime Minister Narendra Modi on his birthday.

“My next bout is against the boxer from Philippines and I have played against him before as well. We will have a look at his game and will make my game plan according to his strengths and weaknesses,” he added.

Rohtak pugilist Sanjeet (91kg) made it a memorable outing in his first-ever appearance at the World Championships when he outpunched the second seed Sanjar Tursunov of Uzbekistan 4-1 to advance to the last-eight. This was his second win over the Uzbek, having earlier beaten him at the India Open in 2018.

“My bout was against World No. 2 from Uzbekistan. I had played against him earlier in the India Open and had won there too. So I was confident about this bout,” said Sanjeet after the win.

“I also had an advantage in height so could land my punches effectively. My next bout is against Ecuador player. We will strategize for it with the coaches. He is a good boxer and I am looking forward to it,” added the Indian, who goes on to face the seventh seed and 2019 Pan American Games silver medallist Julio Cesar Torres Castillo of Ecuador.