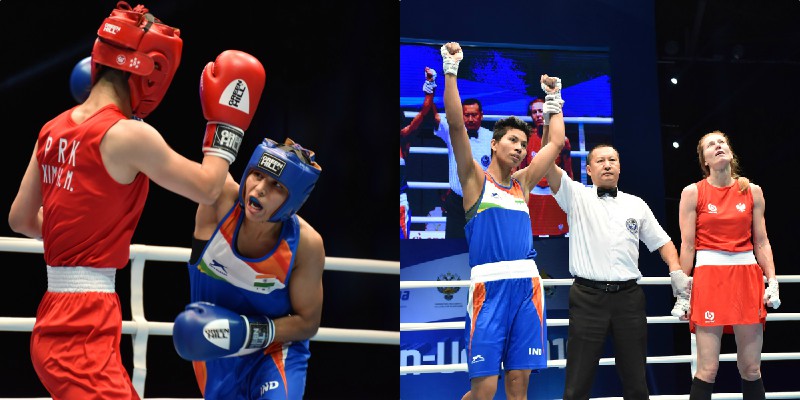 Mary Kom became the only boxer to have 8 WC medals

New Delhi: Six-time world champion Mary Kom (51kg) led four Indian boxers into the semi-finals as India is now assured of four medals from the AIBA Women’s World Championships after a strong show by the Indian contingent on Thursday.

After the London Olympic bronze medallist confirmed her eighth medal from the World Championships, that made her surpass her own record, debutant Manju Rani stole the show by upstaging the top seed in 48kg. Later in the day, Assam girls, Jamuna Boro (54kg) and Lovlina Borgohain (69kg) also won their respective quarter-finals to be assured of medals.

A gold last year in 48kg at home had put the legendary Mary Kom on a tie with Cuban men’s legend Felix Savon. With a convincing 5-0 win over Colombia’s Valencia Victoria, Mary Kom became the only boxer across male or female categories to have as many as eight medals from the World Championships.

This is also the Manipuri ace’s first medal from this prestigious tournament in 51kg, the same category in which she got a bronze at the London Olympics.

“After winning the quarter-final, I am happy and will try to win the highest medal for the country. I would try my best and hopefully win the gold medal here. I would give my best to enter the finals of the tournament,” said the six-time world champion.

Awaiting her in the semi-finals on Saturday is reigning European Championships and European Games gold medallist Busenaz Cakiroglu of Turkey.

Strandja Cup silver medallist Manju Rani (48kg) showed calm nerves and tactical acumen in getting past the top seed Kim Hyang of North Korea with a 4-1 win. With both relentlessly going for their punches, Rani’s anticipation skills helped her evade her opponent’s blows which ultimately gifted her the victory.

“Today’s bout went according to our plan. The strategy that the coaches had fixed, worked well, so I was able to produce this result. We will again have to strategise for my next bout and hopefully repeat the result,” said Manju Rani after the big win.

India Open winner Jamuna Boro too put in an assured performance against Germany’s Ursula Gottlob to register a 4-1 triumph in the 54kg quarter-finals. Boro, who also won a gold at the Indonesia President’s Cup, will be put to a stern test in the semis as she faces the top seed and former Asian Games bronze medallist Huang Hsiao-Wen of Chinese Taipei.

“She took me by surprise with her aggression at first but I knew I could control more with each passing round,” said Boro on her opponent.

“My next bout is against a Chinese Taipei boxer who is taller than me but I have practiced with taller opponents and I am hoping to continue my good performance,” she added.

Later in the day, 2018 World Championships bronze medallist Lovlina Borgohain confirmed a medal for a second consecutive year when she outpunched sixth seed Karolina Koszewska of Poland 4-1. She took time to settle into her bout but played smartly and waited for her moments to land some effective punches as her opponent started looking tired.

Borgohain would be up against China’s Yang Liu, who shocked top seed Chen Nien-Chin.

The only setback of the day for India was the loss of two-time bronze-medallist Kavita Chahal in +81kg. Chahal failed to put up any resistance in her opening bout of the tournament and bowed out after a 0-5 loss to Katsiaryna Kavaleva of Belarus.