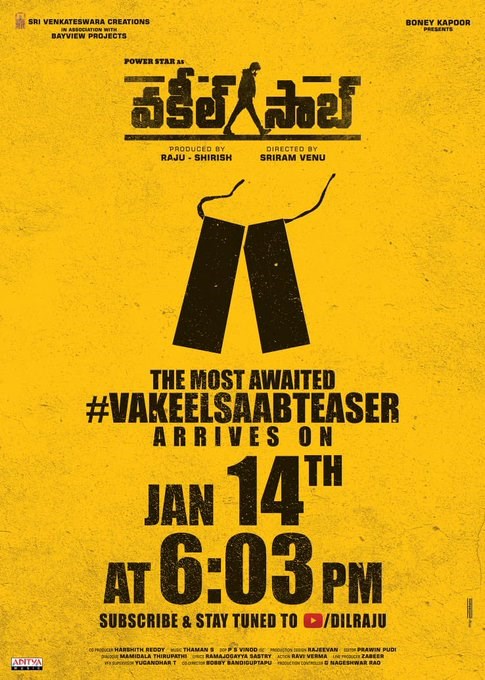 Vakeel Saab, starring Power star Pawan Kalyan is all set to roll out its first official teaser on 14th January, confirms the makers.

Shoojit Sircar directorial Pink, starring Amitabh Bachchan and Taapsee Pannu was a landmark in Indian cinema. The film has already been made in Tamil and now its Telugu remake, starring powerstar Pawan Kalyan is all set to drop its first official teaser on 14th January.

Chennai – Talking Spaces a design show curated by Varsha Menon at Forum Art Gallery on February 26th & 27th at 10.30 AM

This film marks the return of Pawan Kalyan into films after a gap of two years. The film is postponed due to the COVID-19 pandemic, but recently the makers confirmed its completion.

The music for this film is composed by S. Thaman, with Aditya Music grabbed the film’s audio rights. The first single, “Maguva Maguva” written by Ramajogayya Sastry and sung by Sid Sriram and was released on 8 March 2020 and went viral.