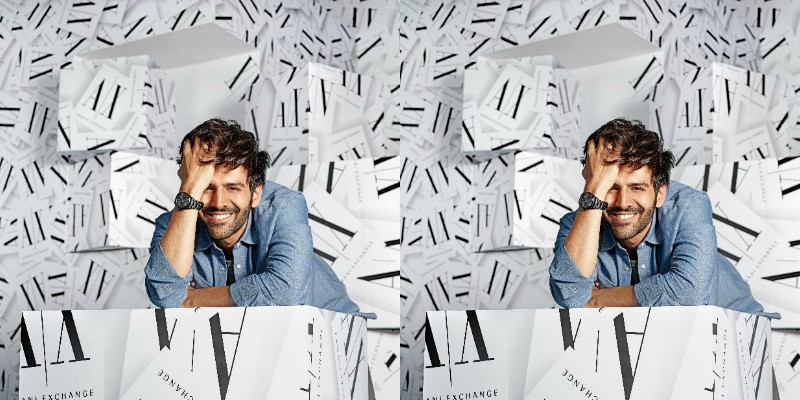 India, 20th September 2019 – Armani Exchange is pleased to announce a collaboration with Kartik Aaryan for its Fall 2019 watch campaign. A rising star in the Bollywood film scene—the Indian actor and model will represent selected styles of Armani Exchange watches through 2020.

The 28-year-old made his acting debut in 2011 and by 2015 rose to fame after winning the Best Actor in a Comic Role at the Stardust Awards. He made his entry in the blockbuster club last year with his release Sonu Ke Titu Ki Sweety and this year’s hit Luka Chuppi has made him a nationwide youth icon. Since 2018, he has won awards from Vogue Beauty, Zee Cine, PETA India and Dadasaheb Phalke Excellence to name a few.

The A|X Armani Exchange Fall 2019 watch collection features high-impact designs, enlivened by strong tones of white, black, electric blue and khaki. The campaign images were shot in Mumbai by photographer Tarun Vishwa. The new collection will be available in August on armaniexchange.com as well as in select department stores globally and at Armani Exchange stores all over the world.

About Armani Exchange: “In 1991 I had an intuition, and I called it A|X. Looking at the reality of the street, before it became just another vogue, I created fast, affordable metropolitan clothing for the young generations or those with a young mindset. The spirit persists today in apparel and accessories that speed forward to an urban drum keeping the quintessential effortlessness and the active stance of the GA DNA.” – Giorgio Armani.

Super Amazing Tourist Spots In Thailand You Should Know Before Visiting