Digital shows that did justice to same-sex relationships 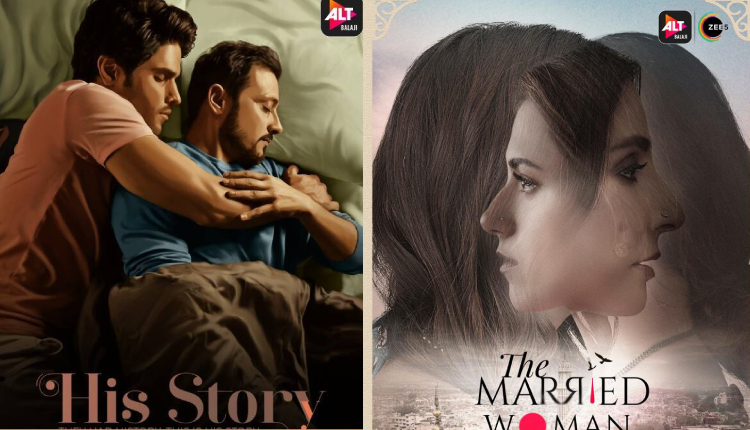 The series adapted from ManjuKapur’s novel, ‘A Married Woman’ addresses various other social issues and taboos that people don’t see fit for day-to-day conversation. It is present in subtle forms in almost all sections of society, making it an essential series to find solutions to all kinds of discrimination. The Married Woman revolves around a married woman Astha and her search for individuality. ‘The Married Woman’ is an urban relationship drama about women and their conditioning levied by society and her search to find herself.
Starring in the series is Monica Dogra and Ridhi Dogra. Along with these two incredible women, there is Suhaas Ahuja, Imaad Shah, and various others.

Made in Heaven – Amazon Prime Video

Amazon Prime’s Made in Heaven was one of their early originals that released in 2019. Despite being made in the early days of digital booming, Made in Heaven dealt with same-sex relationships, traumas, and struggles in the classiest way. Arjun Mathur, as Karan Mehra played a gay man in the show, and through his character, we get to go through the struggle, prejudices, and homophobia that gay men go through in our country. However, by the end of the day when he meets his childhood love, Nawab, played by Vikrant Massey in a guest appearance, even the homophobes would not have been able to stop themselves from going aww.
Starring in the series is SobhitaDhulipala, Arjun Mathur, KalkiKoechlin, Jim Sarbh, Shashank Arora, and ShivaniRaghuvanshi.

ALTBalaji’s latest Urban relationship drama His Storyy released in 2021, and it dealt with homosexuality and infidelity. What sets His Storyy different from others is that it deals with it subtly and doesn’t get preachy anywhere. SatyadeepMisra, as the closeted Kunal and MrinalDutt as the free bird Preet, have done a commendable job. And when they come together on screen it gets difficult to comprehend that both these actors are heterosexual in real life. His Storyy is based on Kunal and Sakshi’s successful marriage for 20 years with two beautiful children. Sakshi’s world tears apart when she learns the truth about Kunal cheating on her with another man, Preet. This eventually leads to their marriage hitting the rocks. His Storyy is a journey of two people, Kunal and Sakshi, trying to rediscover their ties to each other in the face of a crushing revelation.
Actors SatyadeepMisra, Priyamani Raj, MrinalDutt, Nitin Bhatia, Parinitaa Seth, Rajiv Kumar, Charu Shankar, and Mikhail Gandhi play the primary characters in the show.

Based on Sandhya Menon’s 2017 novel When Dimple Met Rishi, Netflix India’s original Mismatched was a rom-com that was released in 2020 during the lockdown. Although the central plot revolved around a heterosexual couple, one of the subplots was about two female best friends figuring out that they have feelings for one another. Namrata and Celina gave goosebumps to many. Although they didn’t have a happy ending, viewers can expect some in the upcoming season.
Mismatched starred PrajaktaKoli, RohitSaraf, RannvijaySingha, and VidyaMalavade in prominent roles.

Netflix India’s anthology AjeebDaastaans has not one but two stories that revolve around the same-sex relationship. While we can talk about one, talking about the other one will be sort of a spoiler for our readers. In NeerajGhyawan’sGeelPucchi, there is tension between Bharti Mandal and Priya Sharma played by Konkana Sen Sharma and Aditi Rao Hydari. Their camaraderie is something, everyone, roots for. However, when Bharti starts having unrequited feelings for Priya the story becomes interesting. The director known for his tonality has set the right tone for this story as well.
The anthology had Fatima Sana Shaikh, JaideepAhlawat, NushrrattBharuccha, Abhishek Banerjee, Aditi Rao Hydari, Konkana Sen Sharma, Shefali Shah, and ManavKaul in primary roles.

It won’t be hyperbole to say that ALTBalaji has been the pioneer to portray gay characters without stereotypes on Indian screens. When ALTBalaji was born in 2017, their first lineup of shows included a gay romance – Romil&Jugal. Based on Romeo and Juliet’s iconic Shakespearean drama, giving it the gay twist, the makers did quite a justice to the show. It was a run-of-a-mill romantic drama that in no way tried being preachy. Rajeev Siddhartha and Manraj Singh romancing each other on-screen completely filmy style is something ALTBalaji made it cool for the first time on Indian OTT celluloid least.
Along with Rajeev Siddhartha as Romil and Manraj Singh as Jugal, the show starred, MandiraBedi, HarimanDhanjal, ShrishtiGangulyRindani, Manini Mishra, and Suchitra Pillai.

While the first season of Four More Shots Please revolved around the four friends, the second dealt more with a lesbian relationship. Anu Menon and Nupur Asthana curated the series that streamed on Amazon Prime Video. Often tagged as the Desi Sex and The City, the second season showcased Umang played by Bani J dating Samara, played by Lisa Ray. The complications, the love, and the romance all of it, well portrayed on the screens.
The series stars Sayani Gupta, Bani J, KirtiKulhari, and MaanviGagroo.

This weekend, it is time you recap these shows or if you haven’t watched them yet, watch them for the first time on their respective streaming apps.

Sanjana Sanghi Join Hands With Save The Children Foundation