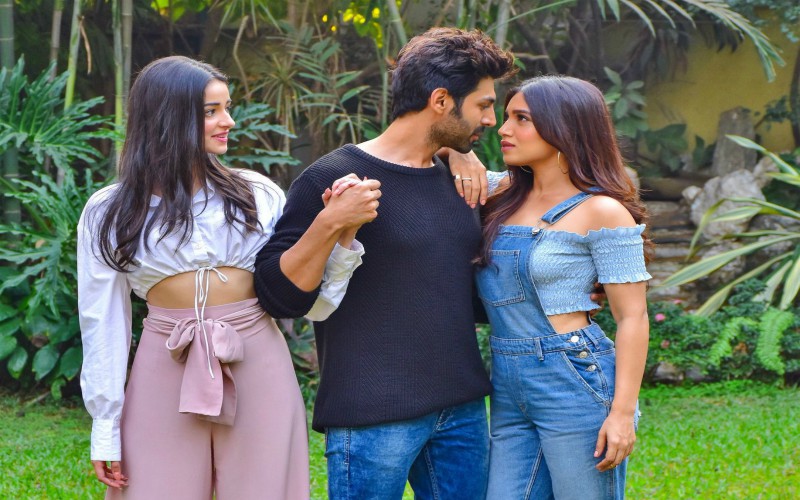 One of the most celebrated romantic drama filmmaker Mudassar Aziz turns a year older today and the team Pati Patni Aur Woh, wish him in the funniest way possible.

Actress Bhumi Pednekar shared a behind-the-scenes picture from the sets of Pati Patni Aur Woh in Lucknow, in which she was seen gazing lovingly into her co-star Kartik’s eyes, with Mudassar standing behind them and looking at them intently.

While Ananya Panday recreated an iconic scene from Dilwale Dulhaniya Le Jayenge (DDLJ) with him, Bhumi Pednekar hilariously referred to him as the “woh” between her and “pati” Kartik Aaryan.

She captioned it, “How can we not look up to u – aapke naam main hi Sir hain…happy bday M @mudassar_as_is #PatiPatniAurWoh #MyDDLJmoment”

Kartik shared a funny video of Mudassar asking him and Ananya to gain weight for their roles in Pati Patni Aur Woh.

He captioned it, “Happy Birthday to the Man who always wants ‘Weight’ in the Performance or the Performers @mudassar_as_is…I gained around 7 kgs for chintu and So did @ananyapanday (3gms) #PatiPatniAurWoh”

The team is shooting Pati Patni Aur Woh in Lucknow. The film is a remake of BR Chopra’s 1978 film of the same name, which starred Sanjeev Kumar, Vidya Sinha and Ranjeeta Kaur.

While Kartik and Bhumi will play a married couple, Ananya will be seen as the “woh” in the relationship.

​Lakshya In Dostana 2 With Kartik Aaryan And Janhvi Kapoor