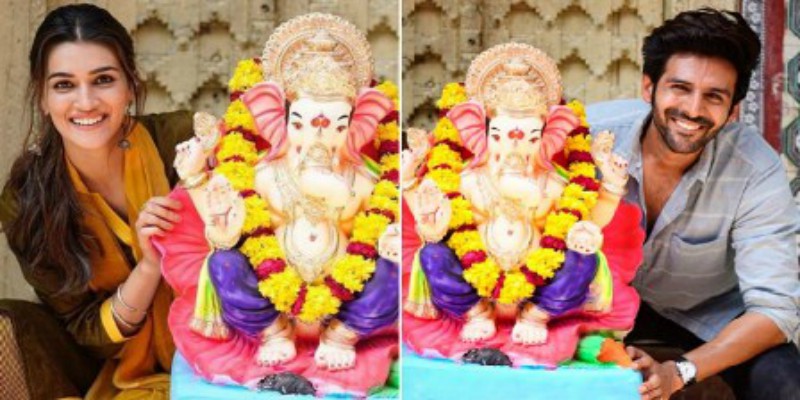 Luka Chuppi co-actors Kartik Aaryan and Kriti Sanon wished their fans a hearty Ganesh Chaturti by using the same picture and cutting each other out of the frame.

Kartik Aaryan shared a picture of himself with a Ganesh idol to wish his fans on Instagram and wrote,  “Happy Ganesh Chaturthi !! Aap sabke jeevan me sukh, shanti, samridhi bani rahe. Ganpati Bappa Moreya! (May you be blessed with happiness, peace and prosperity in your lives).”

However, Kriti shared the same picture- which is a promotional photo from their 2019 release  Luka Chuppi- by cutting Kartik out. She captioned the post as, “Happy Ganesh Chaturthi everyone!! May God bless you with the ability to seize every moment and find happiness in everything you do..! spread love..”

Kartik was quick to notice the same picture with him missing and commented on Kritik’s post. He wrote “Why did you cut me out?” Kriti too was quick to reply, she wrote, “Because you cut me out in your post,” along with laughter emojis.

Other than fans, even celebrities having fun with the banter, Designer Manish Malhotra wrote, “I love the chat you’ll see having about cutting each orthers pic.” A fan mentioned how awesome Kriti’s revenge was,   “Areeee revange taken..kaartik ko kaat dia.”. While another user wrote, “tit for tat.”  and one said,  “both playing lukka chuppi with each other.”

On the work front both are busy with multiple projects. While Kartik is shooting for, Ananya Panday and Bhumi Pednekar’s  Pati Patni Aur Woh , he will also be seen opposite Sara Ali Khan in Love Aaj Kal sequel.

Kriti, on the other hand, has finished shooting for Arjun Kapoor’s Panipat and is currently working on multi-starrer comedy, Housefull 4.