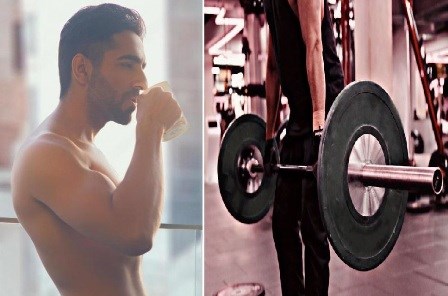 After playing a subtle and sensitive role on-screen for the longest, actor Ayushmann Khurrana is trying his hands with a role that requires him to put on muscle mass. The actor just took to his social media and dropped a picture of himself, pumping Iron for Abhishek Kapoor’s next.

Ayushmann Khurrana is currently preparing for his upcoming movie with Abhishek Kapoor opposite Vaani Kapoor where he would be seen portraying the character of a cross-functional athlete. He is going through a massive physical transformation for the same.

In the photo that Ayushmaan Khurrana posted, the actor can be seen flaunting his muscles as he handles a dumbbell. He is working out in a gym. He captioned it, “It’s going to be a different me in this different film. Movie prep going strong @gattukapoor”

Talking about his film, Ayushmann had said that this would be an emotional roller-coaster ride and a full family entertainer. Meanwhile, the actor who is currently in Chandigarh with his family is prepping hard for the role before the shooting commences.

Ayushmann was last seen in the movie Shubh Mangal Zyaada Saavdhaan which saw a theatrical release. His movie Gulabo Sitabo, directed by Shoojit Sircar, co-starring Amitabh Bachchan was released on the OTT platform due to the COVID-19 pandemic.

​Ayushmann Khurrana Pumping Iron For His Next
0
Share FacebookWhatsAppLinkedinTwitterPinterestEmailFacebook MessengerTelegramViberPrint