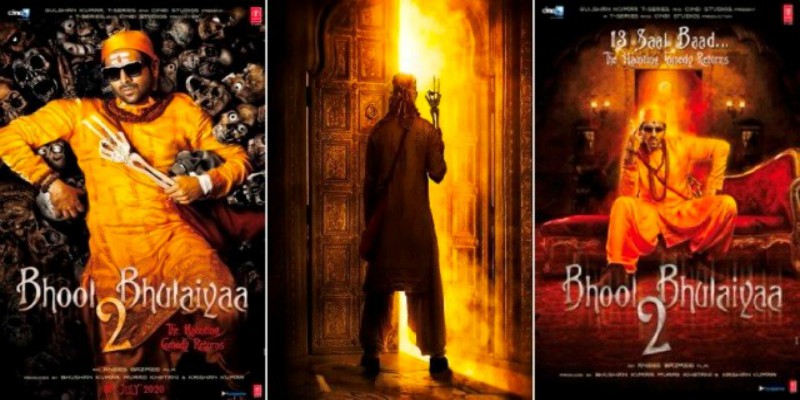 The social media is buzzing with the announcement of “Bhool Bhulaiyaa 2” and this time around it’s not Akshay Kumar but newbie Kartik Aaryan will be busting the myths about Ghosts.

Actor Kartik Aaryan is stepping into Akshay Kumar’s shoes with the upcoming sequel of horror-comedy, Bhool Bhulaiyaa 2, and by the first look of it – there couldn’t be a better choice! The makers are out with back to back three new posters from the film.

Actor Kartik Aaryan shared the poster on his social media. He captioned it, “Ghostbuster is all set to enter…Hare Ram Hare Ram…Hare Krishna Hare Ram…#Bhoolbhulaiyaa2”

Kartik as in the posters revealed by the makers can be seen donning the ‘saadhu’ avatar, with ‘om Namah Shivaya’ written all over his attire with the traditional ornaments just complimenting it fine. However, there’s a twist here, with the trendy shades and shoes, looks like post it’s all been filmed based on today’s era.

Bhool Bhulaiyaa 2, which revives the original after 13 long years, will be directed by Anees Bazmee under the banner of Bhushan Kumar’s T-Series.

While there has been a lot of rumors about the new-gen actresses – Sara Ali Khan, Ananya Panday as well as Janhvi Kapoor being a part of the sequel as the leading lady, looks like the wait isn’t going to be too long!