​Masaba Masaba Trailer Is Out 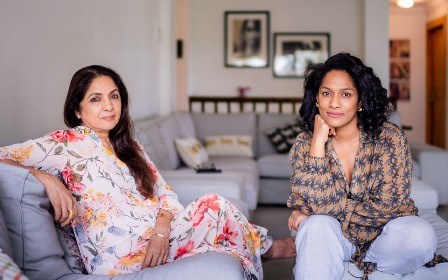 One of the most prolific and celebrated designer of India, Masaba Gupta unveils the first official trailer of show based on her life with Netflix, titled Masaba Masaba.

The trailer introduces Masaba, a fashion designer who runs her own label, has a complicated relationship with her mother (played by real-life mom Neena Gupta) and must learn to juggle the professional with the personal. We see Masaba handling a work crisis, having a discussion with her partner Satyadeep Misra, and confronting a salesman selling cheap knockoffs of her designs.

Based on real-life moments from Masaba Gupta’s life, this scripted series follows her unique background, the diverse worlds she straddles across fashion and family, and her foray back into the dating world. An inspirational, joyous celebration of her life, this fun series is packed with tongue-in-cheek humour, enacted by the mother-daughter duo, Masaba and Neena Gupta themselves.

Netflix’s series is a semi-fictionalised account of the fashion designer’s life. It will debut on 28th August 2020.