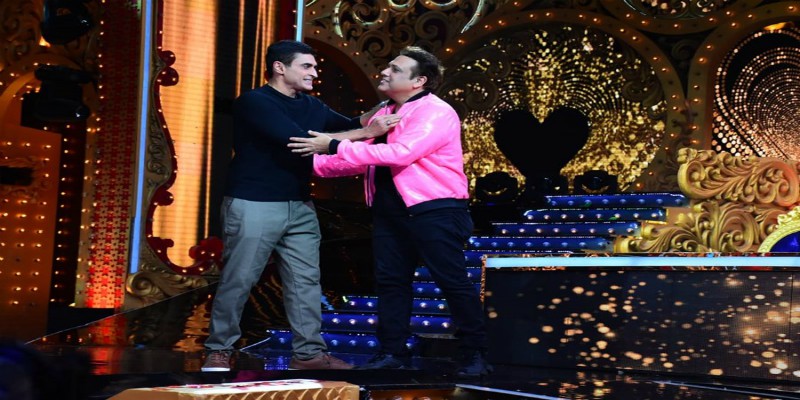 Mohnish Bahl, known for his iconic roles of the 90’s and the extremely loved show ‘Sanjivani’ which is making a comeback on the small screen after 17 years, recently visited the sets of Nach Baliye 9 for the promotions of his upcoming show.

The actor met Raveena Tandon, who is a judge on Nach Baliye 9 alongside Govinda who was also, a guest on the show which is said to have brought back old memories and ring in nostalgia for the actor.

It’s widely known that Mohnish Bahl was a co-actor to the duo on the blockbuster film ‘Dulhe Raja’ and he was playing a negative character. He had a prominent role for which he is known till date. Remembering olden times when the three actors worked together on the sets of Dulhe Raja, Mohnish said, “We have shared some very amazing times together. Working on Dulhe Raja has given us memories of a lifetime and meeting Raveena and Govinda together after so long has made me want to revisit the 90’s and live those time again.”

Although Mohnish has said time and again, that he is not that brilliant an actor, he did share the dance stage with the iconic duo on the sets of Nach Baliye, and shook a leg. The whole environment was full of sweet nostalgia and everyone had a gala time seeing the three actors together on the stage.

Sanjivani was a show that left a deep impact on people and their lives and the fact that it’s going to make a comeback has left people really excited. The show revolves around the personal and professional lives of doctors and the kind of positivity that surrounds them and the positive aura they exude and how they help their patients and keep them above their own lives!

The show will see big names like Mohnish Bahl and Gurdeep Kohli who were also the lead cast of Sanjivani earlier and joining them this time will be Surbhi Chandna, Namit Khanna in the lead roles. The show is being produced by Sidharth Malhotra and will air on Star Plus soon!

Rajiv Ruia’s Mushkil: Beyond The Supernatural