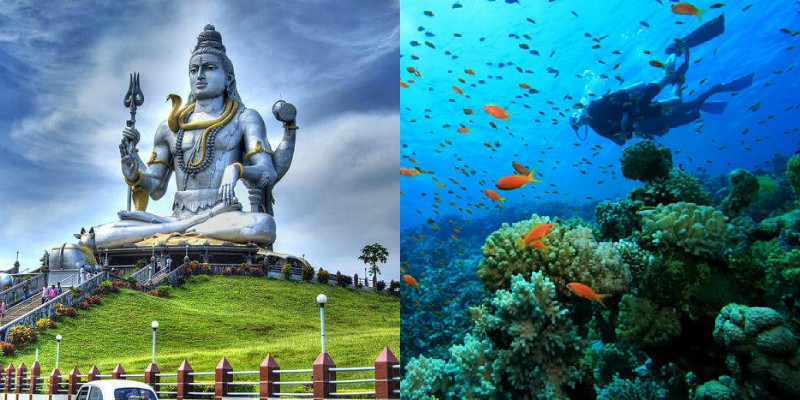 Murdeshwar is a town in Bhatkal Taluk of Uttara Kannada district in the state of Karnataka, South India. Do a traditional exploration at Murudeshwar, in which the major attraction is the huge Shiva Temple. Murudeshwar is a religious site where it is the connecting point for the popular scuba diving destination known as Netrani. Do you know that Murudeshwar is the home to the second tallest statue of Lord Shiva in the world? And yes! It is the tallest one which is encompassed with the blissful Arabian Sea on three sides and the marvelous Western Ghats imposing their presence in the town. It is further pronounced to be the favorite picnic spot for the folks from Kerala and Karnataka. The most interesting thing about the place is that it has great adventure activities and beaches in and around Netrani island. The temple is the beguiling spot for visitors as it allures everyone with its beauty and charm. Netrani island welcomes you to the world of excellent snorkeling and scuba diving. The most fascinating fact about Murudeshwar is the 20 storey high Gopura which is highly guarded by two life-size concrete elephants at the entrance of the steps which will lead us inside.

NETRANI ISLAND: The Netrani island is also known as the ‘PIGEON ISLAND’ and is located off the coast of Karnataka. The overview of the island gives a heart-shaped appearance and invites you to try scuba diving and snorkeling, This particular island is a famous tourist spot and also a famous pilgrimage town which is inhabited with silvery sand. A  thrilling boat ride for about 70 to 80 minutes will take you to the Water Paradise known as Netrani island. You can experience the bewitching species of the water kingdom such as the Napolean Wrasse, Cobia, Stonefish, Black Tip Sharks, Great Barracuda, Turtles, and Stingrays. You can have a perfect dive here in the waters if you are experienced at it.

STATUE PARK: A ravishing stretch of green lawns, the park is surrounded by tranquil water and green grasses as well. With a 15 m majestic statue of Shiva, the place is completely covered with a serene breeze. It is inhabited with flowering plants, stone sculptures and small ponds that have ducks. It also has a splendid view of the artificial waterfall rushing down in a speedy way.

MURUDESHWAR FORT: This is a note-worthy place to be visited in Murudeshwar. Behind the temple of Murudeshwar, there is a fort which is covered with grass and has a green ambiance. It was born in the era of Vijayanagar Kings. The beautiful and serene place where you can capture the memorable moments is at this place! It is also believed to be renovated by Tipu Sultan.

MURUDESHWAR BEACH: The dazzling beach is sandwiched between the sea and a river and is the home for the giant Shiva statue. There are no other water sports available at this place, yet travelers engross themselves into the place with a relaxing swim as well as a tranquil walk at the beach which completely erases the chaos within you. Take a trip to the largest Gopura of the world!

Self Medication is extremely dangerous for your health